Original Painting “One with the Wind” [R] 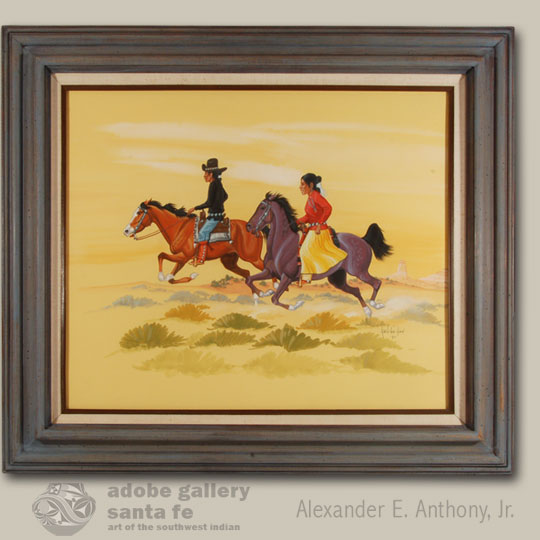 Charlie Lee (1926-2003) Hush Ka Yel Ha Yah (Warrior Who Came Out) was a Navajo painter who was educated by Geronima Montoya at the Santa Fe Indian School.  During his high school years, he met Navajo artist Harrison Begay. Lee claimed to have unsuccessfully attempted to create works in Begay’s style. Nevertheless, he wound up creating many works that were obviously influenced by Begay.  After completing high school, he returned to the Navajo reservation and then back to Santa Fe, as he “did not feel at home at all” on the reservation. He continued studying music and art, and was ultimately moved to become a missionary.  He attended Springfield, Missouri’s Central Bible Institute and then returned to the Navajo Nation.Like many Navajo painters, Lee’s most commonly depicted subjects are horses and everyday rituals.  Clara Lee Tanner’s Southwest Indian Painting: A Changing Art describes Lee as a “good example of an Indian who started painting in the Navajo traditional style and then developed an occasional flourish in the direction of more realism.  His late-1960s paintings demonstrated more ability and versatility than are to be noted in his earlier efforts.” Tanner goes on to list his accomplishments: “Yel-Ha-Yah has exhibited extensively in the Southwest.  He has won various prizes, including two firsts at the New Mexico State Fair in Albuquerque in 1947. Later recognition of his better work includes a Scottsdale second award in 1963 and a third prize at the 1969 Gallup Show.”  Lee passed away in 2003.

This excellent piece, titled “One with the Wind,” was completed in 1980, and serves as a fine example of Lee’s superior later works.  By then, he’d moved away from the simple, two-dimensional images—so clearly influenced by Begay, despite Lee’s claims otherwise—that he produced early in his career.  These later works show an artist who was confident, skilled, and most importantly, unique. Here, his subject matter—a young man and young woman on horseback—is decidedly traditional Navajo, but his execution is a bit more modern.  Lee added shadows, shading, color variances, and a fairly elaborate ground plane and background, creating an image that has both traditional and modern characteristics. Lee’s thoughtful and attentive depictions of small details—jewelry, concho belts, bridles—inform the viewer of his reverence for Navajo life and art.The painting is signed “Yel Ha Yah” and dated “80” in its lower right corner.

Condition: this Original Painting "One With the Wind" is in excellent original condition

Provenance: from the collection of an Albuquerque resident who purchased it from the Tobe Turpen estate. Mr. Turpen was a noted Gallup, New Mexico, Indian trader 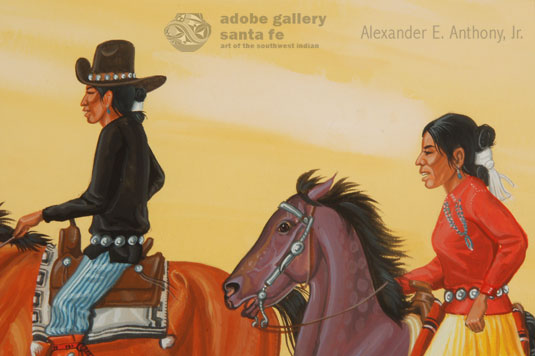