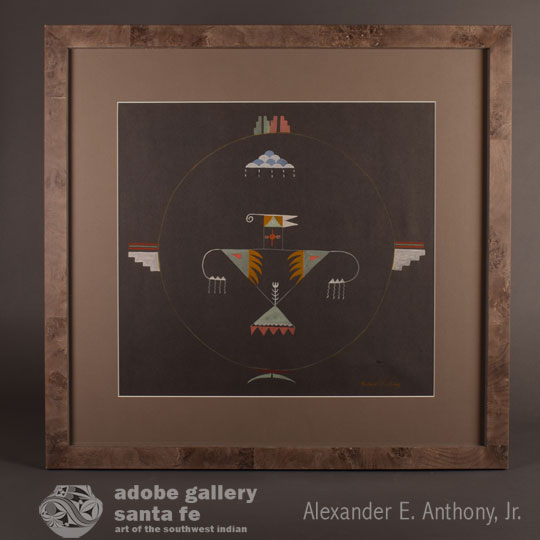 This original painting of a stylized thunderbird by San Ildefonso Pueblo artist Richard Martinez bears little similarity to the traditional pueblo paintings which we handle frequently.  Martinez qualifies as one of the earlier pueblo painters, but differs from his contemporaries in that he mostly painted mythological imagery.  This image—a stylized thunderbird within a circular design—most certainly qualifies as such.  Martinez' thunderbird is beautifully rendered in tempera paints on black paper.  Stacked rain clouds float above its head.  Kiva step designs protrude from a circle, which surrounds the bird and clouds.  Martinez' work here is simple, minimal, and very effective. His color choices are subdued, which works well on the stark black paper.  This is a wonderfully unique piece that deserves the attention of collectors who appreciate one-of-a-kind pueblo paintings.

This painting is signed "Richard Martinez" in lower right. On verso, in pencil notation, is "Ind. 36", similar to a past listing which had "Ind. 35" and was from the collection of Dr. Bertha Dutton. There is a rubber stamp of Dr. Dutton's name and address on verso of the matting.  It is framed under a wide gray mat, within a textured gray frame.

Richard Martinez (1904-1987) Opa Mu Nu was an artist from San Ildefonso Pueblo.  He painted as early as 1920, and, in 1950, was still paining mythological and ceremonial subjects. According to James Bialac, as published in Tanner (1973), and Snodgrass, Martinez was not painting in the late 1960s or early 1970s.  Clara Lee Tanner (1977) stated of Richard Martinez "He favored mythological and ceremonial subjects, and judging by the variety of each, Richard must have been well-versed in the lore of his people. Too, this artist was greatly influenced by Awa Tsireh and his three styles, painting in all of them. Realism-plus-abstract themes appealed to Richard Martinez, for it gave him great freedom for his apparently vivid imagination."

Condition: The San Ildefonso Pueblo Painting "Thunderbird Ascending" by Richard Martinez is in excellent condition. There is one small darkened, crease in the paper in lower right, outside of the main image and just above the artist's name. There is very minor fading of the paper from previous matting but it is rather insignificant.