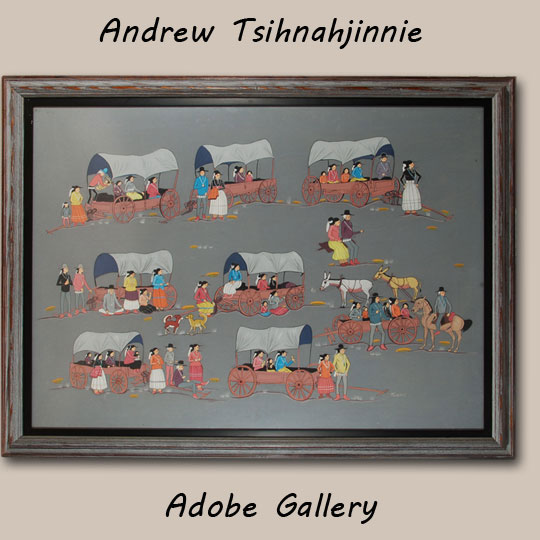 This large original painting was created by Diné artist Andrew Tsihnahjinnie.  Santa Fe Indian School instructor Dorothy Dunn praised the artist’s abilities in her book American Indian Painting of the Southwest and Plains Areas:  “Andrew Tsihnahjinnie, in many respects—incisive interpretation, spontaneity of brushwork, originality of color, vigor of draftsmanship and vitality of action—had no equals among the artists of the studio and perhaps few superiors among modern painters. If equanimity and self-confidence were to rule his artistic abilities, Tsihnahjinnie might well be one of America’s top-ranking painters. In the brief seasons when he felt freed to paint the things he knew so deeply, without troubled concern for doing otherwise, his work attained a trenchant beauty, unique in modern art.” [Dunn,1968:302]

Tsihnahjinnie was a master at depicting realistic images of the everyday activities of his people. Whereas Harrison Begay portrayed idealized scenes of Diné life, Tsihnahjinnie recorded the history of the Diné people in his paintings. He painted scenes of dances, gamblers, ceremonial “Sings”, and other events that occurred frequently in the Navajo Nation. In this painting, he captured the arrival of the Navajo at an approaching “Sing” or dance—possibly that of the Yeibichai. They have pulled in their wagons and set up for the all-night affair. When viewing the painting up close, it is evident that Dunn’s review was well deserved—Tsihnahjinnie’s work with each of the many figures is excellent.  His wide variety of colors, used on top of dark paper, adds to the overall impact.  This is a wonderful example of Tsinahjinnie’s graceful depictions of Diné life.

The painting is signed Tsihnahjinnie.  It is framed in a wood frame, with two interior bands in colors that complement the painting.

Provenance: this Original Painting of Diné Encampment by Andrew Tsihnahjinnie is from a private Santa Fe collection