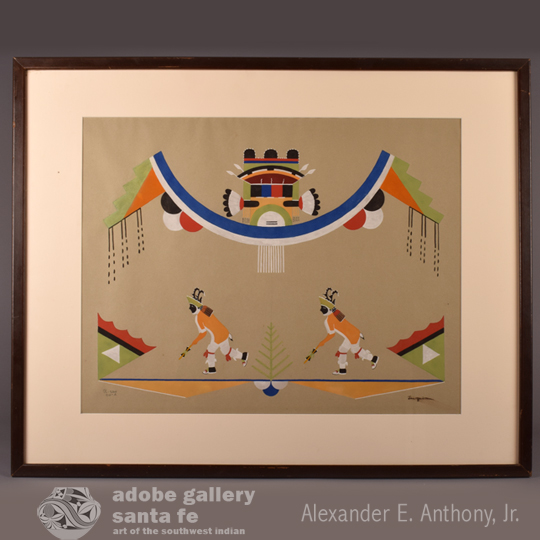 This painting by San Ildefonso Pueblo painter Romando Vigil is traditional in its presentation of a pair of pueblo Antelope Dancers in motion but it is most unusual in its presentation of a Katsina face in the upper center observing the dancers.  The Katsina is above the rainbow and clouds and appears to wear the tableta of a Sio Hemis Katsina. Rain falls from both ends of the rainbow and directly under the Katsina face, below which stands an evergreen tree.  The ground plane on which the Antelope Dancers perform is typical geometric shapes seen on such paintings of the period.

In the early days of the 20th century, La Fonda Hotel, at the end of the Santa Fe Trail, situated on the Santa Fe Plaza, displayed paintings in their guest rooms by New Mexico Indian painters of the period.  These original paintings were removed in the early 1960s—probably because their values had increased but justified as a result of remodeling. The paintings were sold at that time and, occasionally, one or more appears on the market, usually identified by the frame, if the frame had not been changed.  This painting by Romando Vigil (1902-1978) Tse Ye Mu - Falling Cloud has the indication that it was one of the ones in La Fonda, in that in the lower left, in pencil, is marked R-320 94-A. Now, of course, this is speculation that it was in room 320 in La Fonda but we have verified that La Fonda has a room #320.  It is not in the original La Fonda frame.

Romando Vigil was painting in the early 1900s at San Ildefonso and is considered one of the early self-taught artists from there.  He was a leader within the San Ildefonso Watercolor Movement, a movement that caught fire during 1915 to 1917. It fostered an art form unmatched in the cultural history of the world. These men portrayed tribal culture and local wildlife, attaining a flat decorative character, absent of backgrounds and foregrounds, and free of traditional perspective, with an unerring color sense.

Vigil moved to California in the 1950s and was employed by the Walt Disney Studios.  He moved back to the pueblo later in life and resumed painting. It is likely that this is one of the fine works of art produced before his move to California.  It appears to be casein on paper.

Condition: appears to be in excellent condition.  It has had an acid-free mat installed and acid-free foam core as backing to the painting.