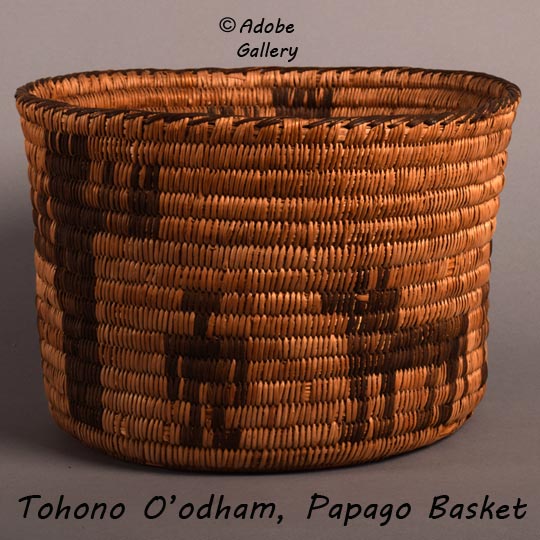 This Papago basket features human, animal and plant designs woven with willow and devil’s claw around a grass bundle.  There are human figures, donkeys, and saguaro cactus, the latter identifying the Arizona homeland of the Tohono O’odham tribe.  It is a deep bowl with upright sides.

The Tohono O’odham (Papago) people of Arizona were major basket makers in the late nineteenth century, primarily making them for their own use. At the turn of the century, basket weaving was being practiced in every home. This continued into the early twentieth century, at which time Southwest Indian basketry became a collectible commodity.  By the 1920s, basket weaving all but disappeared.

By 1960, the Papago women were not making baskets for their own use. They had, by then, substituted commercially made pots and pans for utilitarian use. The utilitarian shapes they had made for use included trays, bowls, jars, and a few miscellaneous forms. The trays were graceful forms and could be shallow or deep. The bowls were deep and large in most cases, but occasionally might be smaller. Jars ranged from large storage vessels to small sizes for trinkets.

There are some basket makers making tourist wares today. They are generally non-traditional shapes, but they satisfy a commercial need.

The Tohono O'odham tribal government and most of the people have rejected the historical name Papago, that was used by Europeans after being adopted by Spanish conquistadors from hearing other Piman bands call them this. The Pima were competitors and referred to the people as Ba꞉bawĭkoʼa, meaning "eating tepary beans." That name was pronounced Pápago by the Spanish and adopted by later English speakers.

The Tohono O'odham Nation, or Tohono O'odham Indian Reservation, is a major reservation located in southern Arizona, encompassing portions of Pima County, Pinal County, and Maricopa County and extends into the Mexican state of Sonora.

Condition: good condition with some loss of stitches

Provenance: this Tohono O'odham, Papago Basket with Life Designs is from the estate of a Santa Fe resident