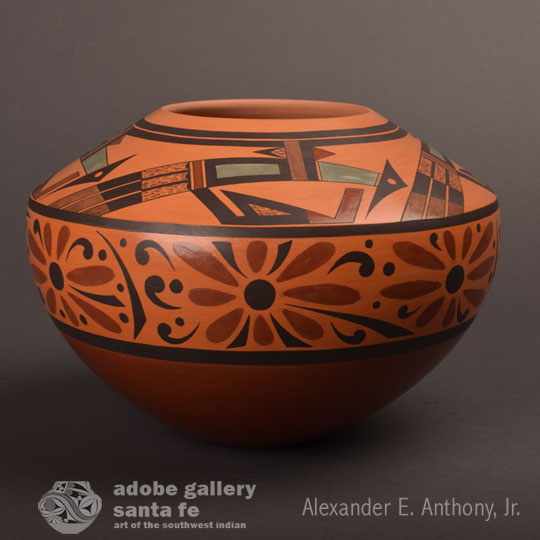 This polychrome pottery jar will be immediately recognizable to anyone who is familiar with the works of award-winning Hopi-Tewa artist Steve Lucas. Lucas comes from a long line of influential potters; he is continuing his family’s legacy of innovation with his outstanding pottery.  As is to be expected, the influence of the artist’s ancestors—Nampeyo of Hano, most notably—is present in the design work on the jar’s upper half. Within and below these more traditional designs, Lucas added his own very personal and unique touches. The top half includes distinctive colors that are not often used on Hopi pottery: a subtle, beautiful grayish purple, as well as a soft blue-green.  These colors are used sparingly, blended in among the more traditional colors and designs. When viewed from the top, the viewer sees four arrows. They emerge from the jar’s widest point and curve in towards the center, intersecting with pairs of lines which emerge from the rim’s framing lines. Each arrow ends at the base of the next arrow. This is first-rate design work; it’s clean, creative, and rhythmic. Down below, a wide design band begins at the jar’s widest point and extends about a third of the way down its underbody.  It contains a flower design, which is repeated seven times with slight variations each time, contained within a pair of framing lines.  Below this section, everything is covered in a gorgeous, rich red. Carved into the red on the jar’s bottom is S. Lucas, along with the artist’s Corn Clan and Mudhead symbols.  The vessel’s shape is noteworthy, too. Its bottom half is essentially a semicircle with a small, flattened bottom. Were its curves to continue through its top half, the jar would be globular.  Instead, at the jar’s widest point, the circular curve ends and the edge turns inward at a sharp 45-degree angle. It continues in this direction all the way to the rim. The uncommon shape of this vessel adds to its considerable appeal.

Steve Lucas (1955-) is recognized as one of the finest of the younger generation Nampeyo family potters.  He is the grandson of Rachel Namingha Nampeyo and the great-grandson of Annie Healing Nampeyo. His mother was Eleanor Lucas.  We do not have an exact date of birth, but he is reported by various sources to have been born around 1955. His Hopi-Tewa name is Koyemsi—the Hopi-Tewa name for the Mudhead Katsina.  Lucas has been a consistent award-winning artist at Santa Fe Indian Market and Gallup Inter-tribal Indian Ceremonial among others. His awards include First and Second Places at the 1994 Santa Fe Indian Market; First, Second and Third Places at the 1995 Indian Market; Best of Division at the Heard Museum in 1997; Best of Show in the 1998 Santa Fe Indian Market.

Condition: this Polychrome Pottery Jar with Flower Designs and Green Accents by Steve Lucas of Hopi Pueblo is in excellent condition

Provenance: from a New Mexico collection