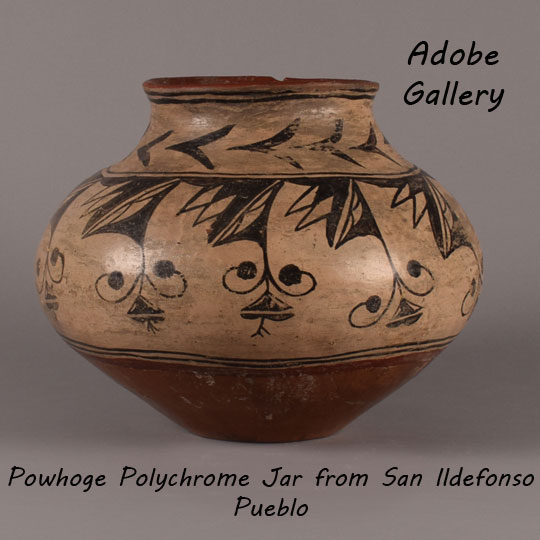 The predominant pottery style at San Ildefonso Pueblo after about 1760 was Powhoge Polychrome, from the Tewa name for the pueblo. This style continued to about 1880, when it gave way to San Ildefonso Polychrome as a designation. The vessel shape is ellipsoidal, and the body is covered in cream slip from the neck to about two-thirds down. The lower third is stone polished basic tan clay. There are double framing lines at the rim, on the shoulder, and below the lower cream slip. The rim is red and there is a thin red line separating the cream slip from the stone polished tan lower body.

The jar was previously attributed to Marianita Roybal by Jonathan Batkin. Comparing the vessel shape with a published similar jar in an article by Batkin, published in American Indian Art Magazine, 1991, entitled "Three Great Potters of San Ildefonso and Their Legacy," one easily sees the similarity of vessel shape.

The rim tops of Powhoge Polychrome are always red, with no exceptions. This is a good indicator to distinguish it from similar types made at Santo Domingo and Cochiti during the same period. Their rims were always painted black. Another unchanging trait is there is never any red in Powhoge Polychrome designs. Powhoge Polychrome sometimes had ceremonial line breaks in the framing lines, but this jar does not feature such breaks.

This jar dates to circa 1880, which fits in well with known dates of Marianita Roybal's pottery making. She was born in 1843 and was actively potting by 1860. One pottery pitcher she made in 1881 is now in the collection of the School for Advanced Research in Santa Fe. It is the earliest vessel from any pueblo that is identified with a potter's name. She apparently potted until about 1910.

Condition: No significant damage or repairs. There are areas of abrasions and one rim chip. The jar has been examined under a blacklight and shows no signs of restoration.

Provenance: this Historic Powhoge Polychrome Jar from San Ildefonso Pueblo is from the collection of a gentleman to whom we sold this in 1992.