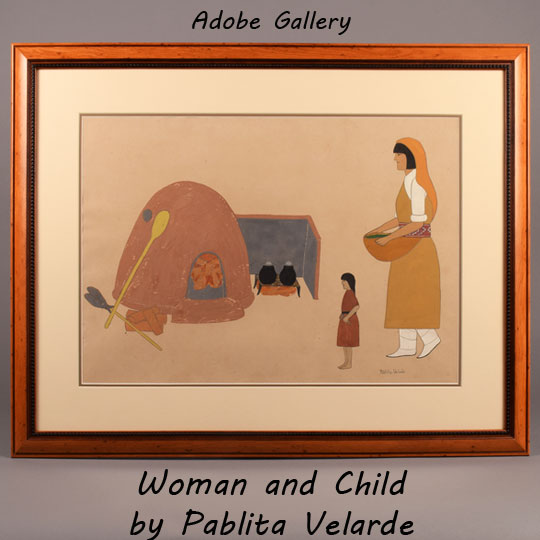 This original painting was created by Pablita Velarde, a Santa Clara Pueblo artist who was one of the first Pueblo women to build a career as a painter.  Most of Velarde’s works that are available on the market today are ceremonial scenes completed in mineral earth pigments.  This particular piece varies, offering a snapshot of daily life.  It appears to have been completed in casein and likely dates to early in the artist’s career.  We are pleased to have the opportunity to offer this rare and beautiful painting to Velarde’s many collectors.

The painting features a pueblo woman and a child—her daughter, perhaps—baking bread.  A large horno oven occupies much of the painting’s left side, with a fire raging within.  Near the center of the image, a smaller fire heats two black pots.  The child faces the horno oven; she is followed by the woman, who carries what appears to be blue corn meal.  Velarde selected a palette of soft, earthy tones for the painting, and they serve the image well.  The woman and child are composed in a gentle, delicate manner, exuding warmth and character as they go about their work.  They are fairly simple, which makes sense for an early piece, but they’re every bit as alluring as the more complex figures that would appear in Velarde’s later works.  Given the prominence of its creator, this painting feels like an important part of Santa Clara Pueblo history, and its beauty manages to match its considerable historical significance.

The painting is signed Pablita Velarde in lower right.  It is framed beautifully using high-quality materials, including conservation glass, archival matting in tasteful colors, and a carved wood frame.

Velarde painted in the traditional style of the Santa Fe Indian School, creating accurate portraits of Native American life and culture. At first, she worked in watercolor, but later learned how to prepare paints from natural pigments—a process called Fresco Secco.  She is best known for these mineral earth paintings. She ground mineral and rock elements using a metate and mano until the result was a powdery substance. From this substance her paints were made. She also painted on paper, often using casein in addition to earth pigments. She was also known to create art derived from the Navajo sandpainting tradition.  Velarde’s list of accomplishments and accolades is long and varied.  Her works have been exhibited around the country and are included in many prestigious public and private collections.  Author and anthropologist Clara Lee Tanner called her the “greatest woman artist in the Southwest.” Velarde passed away in 2006.

Provenance: this Rare Early-Career Painting of Pueblo Woman and Child by Pablita Velarde is from a private Arizona collection