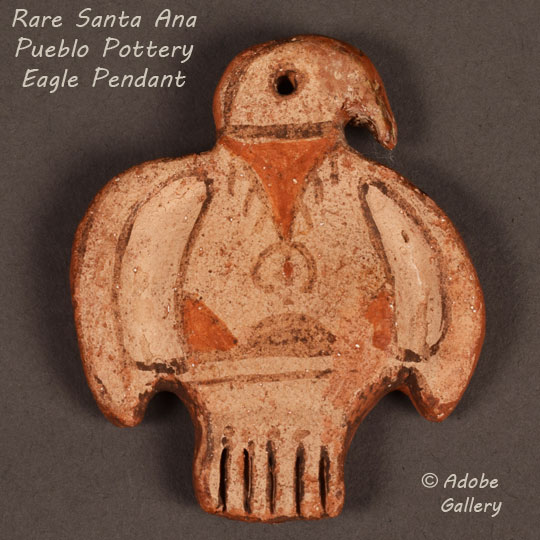 In the 1600s, the Spanish gave the name Santa Ana to what was then a Keres-speaking pueblo by the name of Tamaya. The pueblo was close to the Jemez River in an area with poor farming land. In the 1700s, the pueblo began searching for good farming land near the Rio Grande. The village chosen for that purpose became known as Ranchitos. By the mid-1700s, most members had moved to the new location.

In the Jemez Mountains, Santa Ana Pueblo was neighbors to Zia Pueblo and the pottery of the two pueblos was almost indistinguishable. Once located in the new village near the Rio Grande, potters at Santa Ana found it necessary to abandon the use of lava in pottery construction and they switched to the use of sand as the tempering agent. This use of sand has continued.

Santa Ana potters refrained from entering the tourist market with their pottery until the 1940s at which time a small group of potters began making a limited amount of pottery to sell at Coronado State Monument near Albuquerque. It was at that time that we saw the emergence of small, non-functional pottery wares made with the buying public in mind.

This Santa Ana Pueblo pottery pendant could be one of the items made and sold at Coronado State Monument. It appears to be from that time. Such items from those 1940s markets are very rare today. Most of the ones purchased then have been broken, abandoned, and no longer in existence. It is a treat to see this one.