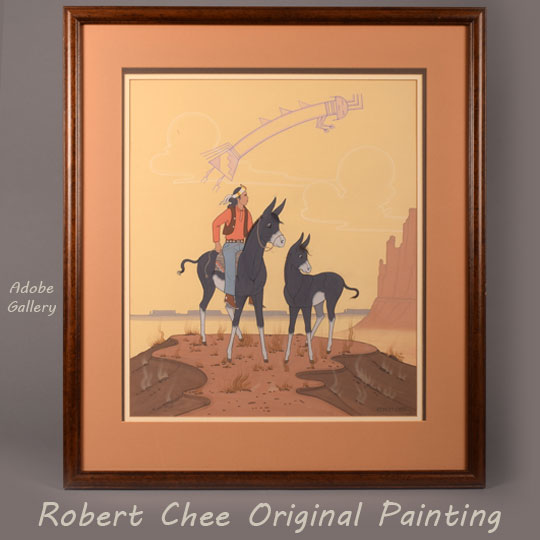 This original painting was created by Diné of the Navajo Nation artist Robert Chee. In this scene, a Diné man is riding on the back of a donkey. A second donkey joins, making a trio of travelers. They've paused their journey; they stare off into the distance at someone or something that will remain mysterious to the viewer. Up above, a Yei figure floats across an intermittently cloudy sky, looking down toward the group of travelers.

Chee’s work here is, as usual, inventive and appealing. He had a way with crafting images that are warm and accessible, in a similar manner to Beatien Yazz—the colors and compositions are strong, the figures are imbued with personality, and the desert landscapes are stylish. Each piece is a success on a technical level, with excellent linework and a great deal of depth in the figures’ forms. This piece is no exception. It’s another fine example of Robert Chee’s work.

The painting is signed Robert Chee in lower right.  It is framed in a carved wood frame with multiple layers of matting in tan, gray, and white.

Provenance: this Robert Chee Original Painting of Diné Man and Yei Figure is from a private collection of an Oklahoma resident