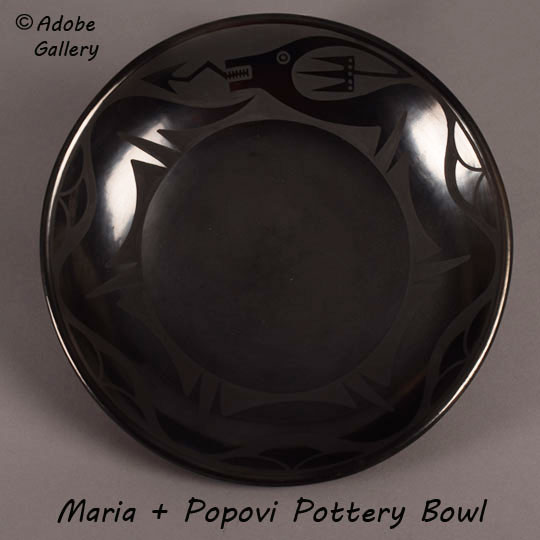 This San Ildefonso Pueblo black pottery bowl by Maria Martinez and her son Popovi Da has the most beautiful solid black sheen as one could accomplish. This shallow bowl is spectacular in shape, polish, and design. It continues a legacy begun over a hundred years ago by the Martinez family. Maria and Popovi Da would be proud of this bowl and Maria would be astonished at the praise bestowed on her for doing only what pueblo women have done for centuries-making pottery. She, and her family, elevated the process above the normal to a very high level.

The shallow shape of the bowl is perfect for highlighting the Avanyu design as it is displayed on the edge of the bowl that rises from the base. The Avanyu has remained a favorite design on blackware since Julian first introduced it. In painting the Avanyu design on the interior of the bowl, Popovi recreated a design that was the very first one used by Julian back in the 1920s. Julian's first attempts at painting Maria's blackware were to use an Avanyu as the design. History repeated itself in this bowl, thanks to Maria and Popovi Da.

The design band encircling the interior rim of the bowl measures 2-½" wide. Within this band, Popovi Da painted the matte black in a design to outline the Avanyu in the polished portion of the bowl. Historically, Julian had done the opposite. He painted the surface, in full, with the matte pigment and Maria then had to stone polish the Avanyu to bring it out of the matte. This was extremely difficult to accomplish, so Julian, after a few attempts, reversed the process which resulted in the technique used today by those who have followed him. This shallow black-on-black bowl bears the dual signature Maria + Popovi and the date 4/63. This is typical when Mother and Son collaborated together. Around the mid-1950s, Popovi Da began working with his mother, helping her with designing and firing her pottery. They began to co-sign their pottery and Popovi started putting a date on each piece, probably around 1959.

It is likely that Maria's sister Clara stone polished the bowl for Maria. Clara was deaf and Maria supported her by having her polish all of Maria's pottery. I do not know what year or period Clara started helping Maria, but surely, she was doing so at the time this bowl was made. Popovi painted the design and probably assisted Maria in the firing.

What is an Avanyu? A deity of the Tewa Pueblos-San Ildefonso, Tesuque, San Juan, Santa Clara, Nambe, and Pojoaque-and is the guardian of water. He is represented as a horned or plumed serpent with curves suggestive of flowing water or the zig-zag of lightning. He appears on the walls of caves located high above canyon rivers in New Mexico and Arizona and may be related to the feathered serpent of Mesoamerica- Quetzalcoatl and related deities.