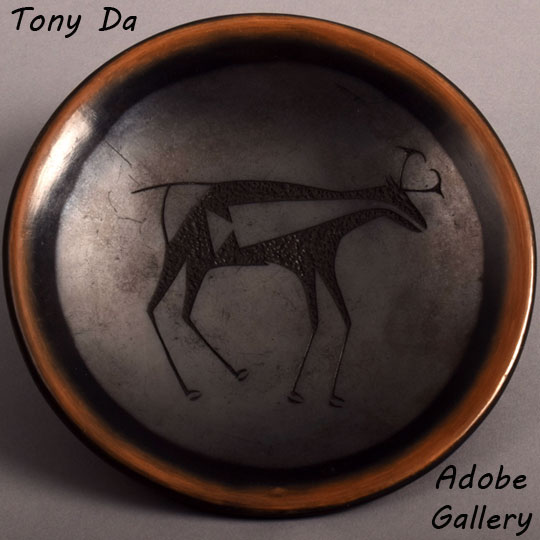 This black shallow dish, made in 1968 by San Ildefonso Pueblo artist Tony Da, has a sienna rim encircling the design of a sgraffito antelope that rests in the base of the dish.  The heartline from the mouth to the heart expands as it enters the body.  The outer rim of the dish is stone-polished black, which rolls over to the top of the dish in a sienna tone.  A narrow darker black inner rim encircles the dish just below the sienna.  The matte-finish underside of the dish has the traditional DA signature.

Tony Da (1940-2008) was among the first of the pueblo potters to expand the popularity of such beyond the average collector of traditional pottery.  He rapidly advanced his art and techniques from the traditional beginning of bear figurines and sgraffito-designed jars to elaborate works of art.

Tony Da was destined to become one of the finest artists of the 20th century. His grandparents, Maria and Julian Martinez, and his father, Popovi Da, were skilled artists. Tony was a painter from early in life and was winning awards for his paintings. A change occurred when he moved in with his grandmother in 1966. She taught him the techniques of pottery making and he learned very well. Within three years, Maria said he had nothing else to learn from her.

Tony Da's first pottery pieces were simple bear figurines. Maria commented that he was very good, and she could not do anything to make him better, except that he needed to learn to make ollas, which, of course, he did. His early jars were simple red ones with an Avanyu encircling the body just below the rim.  From these simple figurines and jars, Tony rapidly expanded his repertoire to elaborate and beautiful pottery creations. It is my understanding that Tony’s dad, Popovi Da, fired all of Tony’s black pottery.

Tony Da had a very short career as an artist before a devastating motorcycle accident in 1982. Although he survived, Tony suffered massive head injuries because of this event, which ended his ability to paint or make pottery at a very high level. As a result, this ended his prestigious and promising career as an artist. In only a dozen years, he created many masterpieces and received world-wide recognition. Very few artists can claim such fame in such a short time. Fortunately for us, he left a legacy of outstanding art objects.

Provenance: this San Ildefonso Pueblo Black with Sienna Rim Antelope Dish by Tony Da is from the collection of a gentleman from Massachusetts who purchased it in 1968