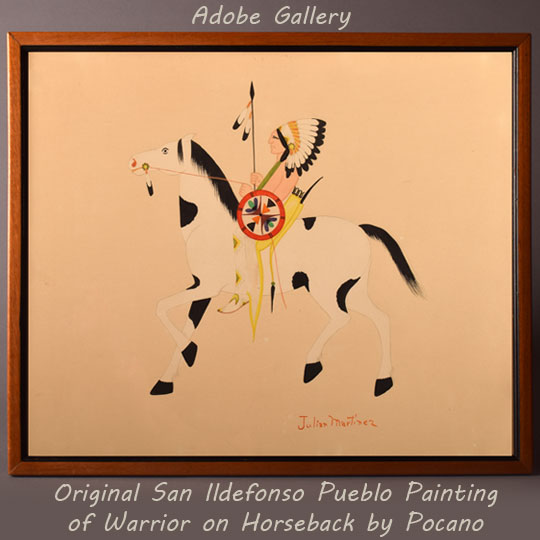 This painting by San Ildefonso Pueblo artist Julian Martinez is an early classic Native American image of a warrior on horseback.  Though most widely recognized for his efforts painting pottery made by his wife Maria, Julian Martinez was productive and successful with his solo ventures.  This brightly colored, skillfully crafted painting is an excellent example of the “flat style” of painting that was taught to young Native students at the Santa Fe Indian School in the 1930s.  This well-documented movement had actually begun many years earlier at Martinez’ pueblo of origin, which places the artist among the earliest known Pueblo painters.

Martinez’ subject here is a warrior on horseback.  As is to be expected of a “flat style” image, the figures are seen in profile and there is no background or ground plane.  Martinez paid careful attention to his subject’s clothing and weaponry, outlining each of the headdress’ many feathers and adding colorful patterns to the shield.  The warrior himself looks stoic and focused.  His visible eye—a capital “A” turned on its side, essentially—is similar to those seen in many works from this early era.  The black and white horse is simple and minimal.  Martinez’ decision to place a colorful circle in the center of the image and then surround that circle with colors that are a bit more muted was most effective.  This is a strong image from one of the earliest known pueblo painters.

The painting is signed Julian Martinez in lower right.  It is framed in a thin wood frame with a black interior band.

Condition: Excellent condition. A few minor discolorations are visible near the edges, from previous non-archival framing materials.  These materials have been replaced.

Provenance: This Original San Ildefonso Pueblo Painting of Warrior on Horseback by Julian Martinez is from a private collection of a Canadian family,