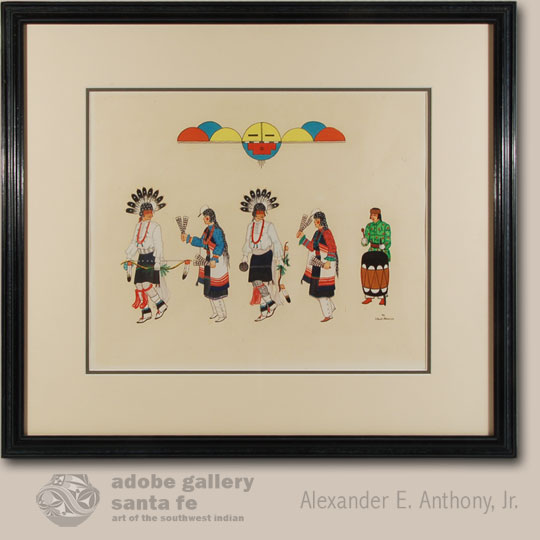 The nephew of famed San Ildefonso potter Maria Martinez, Gilbert Atencio (Wah Peen) was born in 1930. He was one of the youngest San Ildefonso painters. A student at the Santa Fe Indian School, Atencio had already had a museum show by age twenty and had garnered many awards for his work before that.

Atencio favored painting clowns and using vivid color. As he got older his attention to detail became nothing short of remarkable. He was one of the first Southwest Native artists to paint a portrait of people—his aunt and uncle, in fact—Julian and Maria Martinez. It wasn’t until the 1960s that portraits became more commonplace. His later works became somewhat abstract.

This painting depicts participants in the San Ildefonso Snow Bird Dance procession. I do not know the purpose of this dance but assume it is a plea for snow and its effect on spring wildlife.  The artist’s attention to detail is the defining appeal to his work.  Atencio was a professional medical illustrator at Los Alamos National Labs and the detail exercised in those illustrations followed into his paintings.  Every item of clothing on all five participants is presented in the most minute detail.  The faces of the men and women are beautiful.  Atencio was an amazing artist and is recognized as one of the finest pueblo artists of the 20th century.

The painting is not dated but is signed by the artist in lower right.  It is circa 1948.

Condition: there is a small crease in the paper just above the drummer

Recommended Reading: Through Their Eyes—Indian Painting in Santa Fe, 1918-1945 by Michelle McGeough, Wheelwright Museum of the American Indian, 2009 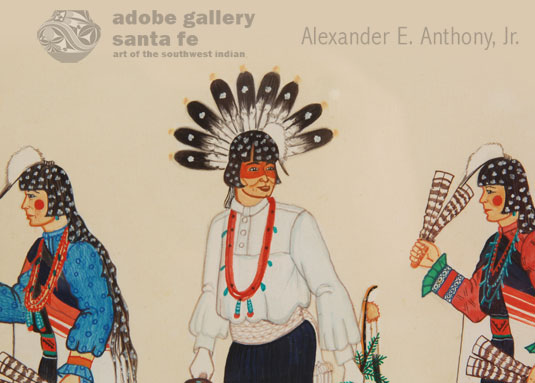