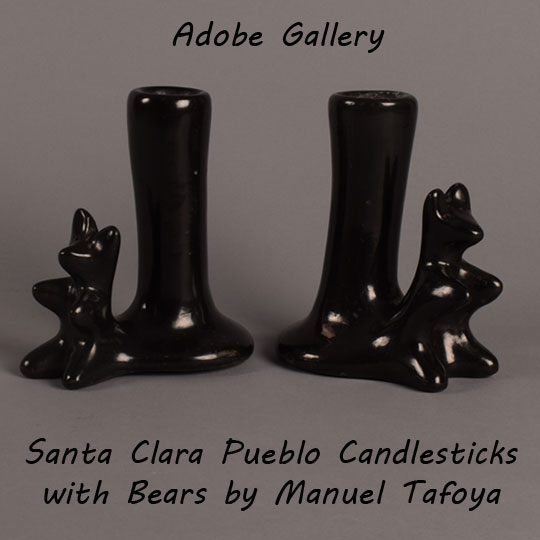 The famous Margaret Tafoya was known to occasionally make pottery bears. While some elements are the same, these pottery bear candlesticks created by her brother, Manuel Tafoya, have an essence all their own. These were probably made as late as the 1950s. The highly burnished finish is a clue to that.  Manuel is credited with assisting his mother, Sara Fina Tafoya, with her pottery, particularly he is known to have executed the carved designs on her pottery.  Manuel was the second oldest of Sara Fina’s children, nineteen years Margaret’s senior.

“The records show that he married in 1910 and again in 1916 after the death of his first wife, but no record of children by these marriages was found, nor does anyone interviewed at Santa Clara remember his wives or any offspring.  Manuel assisted the family with all of their many chores and facets of pottery-making. It is known that he was a good potter on his own, one of his specialties being the creation of unique animal forms with blunt noses which were often attached to bases of candlesticks.” [Blair 1986:59]

Provenance: this Santa Clara Pueblo pair of candlesticks with bears by Manuel Tafoya is from the estate of Henry Christensen III, former attorney at law of New York City, to whom we sold this in 2007.