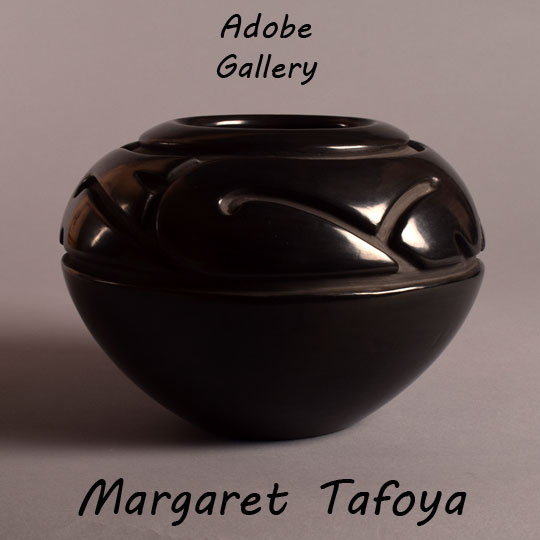 This gorgeous carved black pottery jar was created by legendary Santa Clara Pueblo potter Margaret Tafoya.  It is a fine example of Tafoya’s work, and an excellent reminder of why she’s come to be regarded as one of the most important Native American artists.  Her work is always elegant and beautiful.  Gallery visitors who are unfamiliar with these art forms often gravitate towards the blackware.  They’ll ask us what the black pots are made of, and they’re usually stunned when we explain to them that they are made of earth and fire.  The results of the stone polishing process are particularly intriguing to these Indian art newcomers, as they often believe that it is some sort of commercial glaze that gives these pots their sheen.

This jar would be a perfect introduction to the work of Margaret Tafoya. Save for its flat rim and bottom, it is almost globular in shape.  Two framing lines—one at the jar’s widest point, one just below its rim—circle the jar.  A variety of carved designs wind upward from the lower line and downward from the upper line, occasionally crossing the entirety of the design band and linking the two framing lines.  These carved designs are deep and consistent, revealing matte-finished interior lines.  The jar’s polished surface is exceptionally appealing.  This jar exudes elegance and sophistication. It’s an exemplary piece from one of the greatest Pueblo potters. The bottom of the jar is signed Margaret Tafoya, Santa Clara Pueblo.

Margaret Tafoya (1904 - 2001) Maria Margarita Tafoya - Corn Blossom was one of the most famous and influential Pueblo Indian artists.  Tafoya was born August 13, 1904 at Santa Clara Pueblo. She learned her skills from her parents, Sara Fina Gutierrez Tafoya and Jose Geronimo Tafoya, who were expert potters; some of her pieces are inspired by tales she heard from her parents and grandparents. Margaret and her mother were known for their ability to make unusually large storage jars and water jars. Tafoya believed the secret to her success was her polishing stones, which have been passed down through the generations. She taught her pottery-making skills to many of her nine children, including Virginia Ebelacker, Mela Youngblood, Toni Roller, LuAnn Tafoya, and Esther Archuleta.  In 1985, Margaret Tafoya was one of three New Mexicans selected to receive the Governor's Award, New Mexico's highest artistic honor. This award is given for a major contribution to the arts of New Mexico. Tafoya passed away in 2001.

Condition: Excellent condition. A few very small abrasions, none of which is distracting

Recommended Reading: Born of Fire: The Pottery of Margaret Tafoya by Charles King.