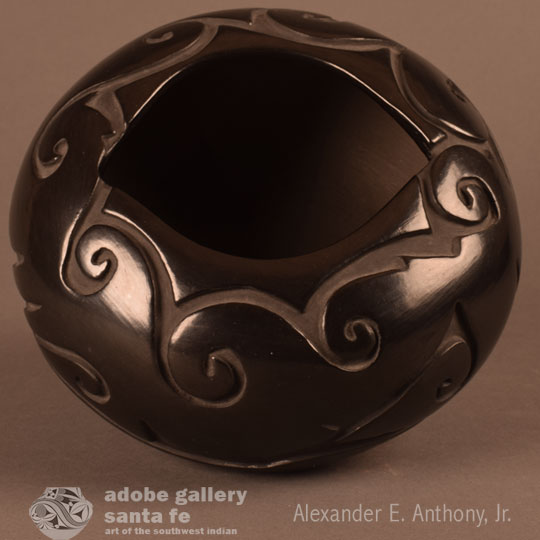 Santa Clara Pueblo artist Tammy Garcia has been recognized as one of the top young Native American pottery creators of our day. Tammy Garcia has followed the time-honored tradition of producing Santa Clara Pueblo pottery. However, she has not restricted herself to these same traditions. She has allowed herself to be different, contemporary, and on the cutting edge of innovation.

This bowl was made by Tammy Bortz before she became Tammy Garcia, probably in the late 1980s.  It was at that time that we were purchasing pottery from her with the signature of Tammy Bortz.  It is obvious that she had already passed through the period of “beginner” and into the period of “experienced potter.”  This jar clearly shows evidence of departure from the standard blackware from Santa Clara into something more creative. By the end of the 1990s, she was signing her pottery Tammy Garcia and was already, at age 29, recognized as one of the top young potters of the time.  She had been born in 1969.

The bowl has an oval opening rather than a traditional circular one.  Around the opening is a series of scrolls resembling waves. The design below the waves is a very stylized Avanyu water serpent, swimming below the waves.  The bowl has a beautiful burnish.

Condition: this Santa Clara Pueblo Black carved Pottery Bowl by Tammy Garcia is in very good condition with some abrasions primarily to the underside.

Provenance: from a client who has found it necessary to downsize her pottery collection