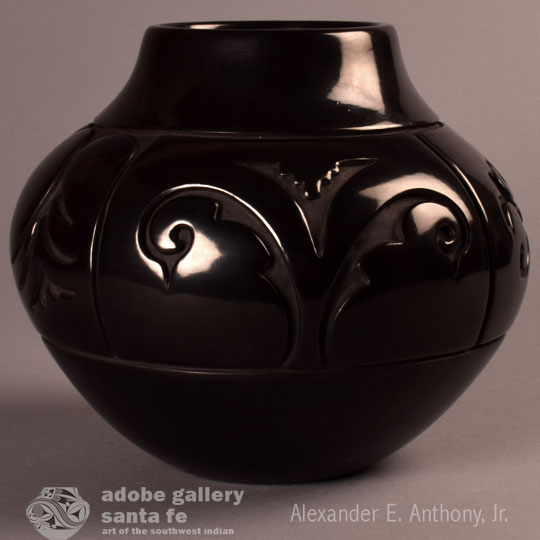 This carved black polished jar by artist Linda Tafoya-Sanchez is an exemplary piece of contemporary Santa Clara Pueblo pottery.  Tafoya-Sanchez is known to experiment with unique forms, materials and applications while still making pieces that will appeal to those who appreciate traditional Santa Clara designs.  With this piece, she sticks with the established style of her people: stone-polished, carved blackware.

Tafoya-Sanchez did an excellent job with this jar.  Its shape is elegant. Its designs—four unique patterns, separated by vertical lines, contained within two horizontal framing lines—are strong.  The width and depth of the carved areas are consistent throughout the jar, which is typical of Tafoya-Sanchez’ works. Its polish is smooth, even, glassy and reflective. This is an exceptionally well-crafted piece of Santa Clara Pueblo pottery. It deserves the attention of collectors who appreciate elegant, refined blackware. Linda Tafoya Sanchez (1962-) of Santa Clara Pueblo is known to some collectors by a previous married name: Linda Tafoya Oyenque.  She is a daughter of Lee and Betty Tafoya, and a granddaughter of Margaret Tafoya. She credits her aunt Mary Ester Archuleta for training her to be a potter. Linda has branched out from creating traditional burnished blackware with simple carved designs.  She sometimes mixes burnished black with matte black, and has introduced the use of micaceous clay in the mixture. Linda is a highly decorated artist whose awards are too numerous to mention here, but certain honors certainly deserve mention. She has earned awards at the Santa Fe Indian Market, the Heard Museum and several other major exhibitions.