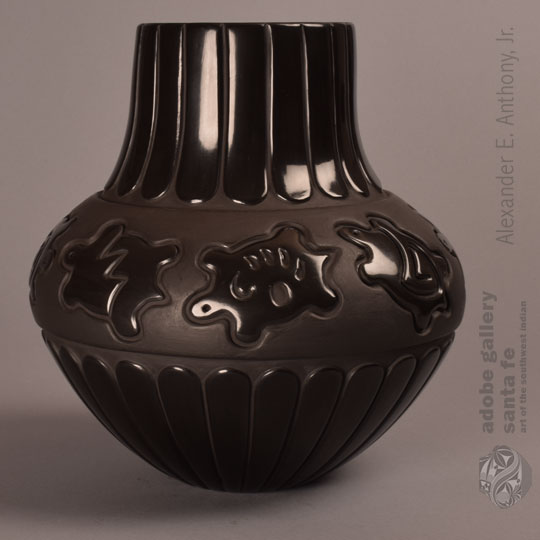 Linda Tafoya-Sanchez is a wildly creative potter who succeeds at making works that, like this excellent blackware jar, simultaneously pay respect to tradition and expand into new territories.  This jar’s wide design band features eight turtles; each one has a different design on its shell. We see rain clouds, a lightning bolt, a bear paw, and a spiral, among other things; though we do note that many of these are open to interpretation.  The turtles are polished, their designs are carved. The wide band through which the turtles travel has a matte finish. The design band’s center sits just above the jar’s widest point.

The design band is exceptional, but the work surrounding it deserves attention as well.  Polished pillars run up from the jar’s bottom and down from its rim, reaching rounded endpoints at the center design band.  The carved areas that define them are shallow, very consistent, and filled in with the same matte finish as the design band.   Linda Tafoya-Sanchez’s work is consistently excellent, and this unique piece is no exception.

Linda Tafoya Sanchez (1962-) of Santa Clara Pueblo is known to some collectors by a previous married name: Linda Tafoya Oyenque.  She is a daughter of Lee and Betty Tafoya, and a granddaughter of Margaret Tafoya. She credits her aunt Mary Ester Archuleta for training her to be a potter. Linda has branched out from creating traditional burnished blackware with simple carved designs and expressed a great deal of creativity.  She mixes burnished black with matte black, and has introduced use of micaceous clay in the mixture. Linda is a highly decorated artist whose awards are too numerous to mention here, but a couple honors certainly deserve pointing out. She has earned awards at the Santa Fe Indian Market, the Heard Museum and several other major exhibitions. One of her notable accolades is her appointment to create a piece for presentation to the Prince of Spain.