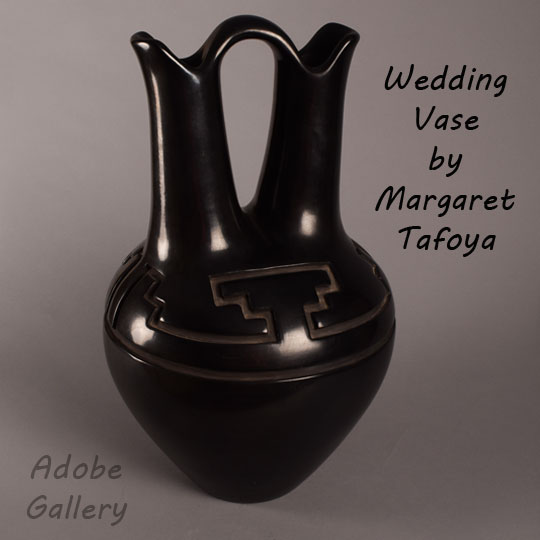 This blackware wedding vase was created by Margaret Tafoya, a Santa Clara Pueblo potter who is widely regarded as one of the most significant Native artists of the twentieth century. When viewing this piece, one will likely first notice its most striking attribute: its size. At twenty-one inches in height, this is a massive piece. Its presence is undeniably impressive, even in a room full of exceptional pots. This piece dates to the 1960s.

While the size of the piece is noteworthy, it’s the quality of the work that is most outstanding. The vase excels in form and design. Its large lower section resembles that of a slightly enlarged pueblo olla. As its shoulder rolls inward, two tall spouts emerge, pointing just slightly outward. An arch links the two spouts, completing the traditional pueblo form known as a wedding vase. This execution is strong, well balanced, and immensely appealing. It is polished to perfection, which is typical of Tafoya’s works but well worth exploring with each example.

A horizontal carved band circles the vessel’s widest point. Below the exterior edge of each spout, a more complex carved pattern emerges upward from the horizontal band. With each of the two repetitions of this design, a series of right-angled turns forms kiva step patterns. Near the center, the bands turn upward and outward again before repeating their movements in reverse, forming strong central elements which also include kiva step patterns. The symmetrical nature of the carved designs mirrors that of the vessel itself, with each element appearing elsewhere in reverse and every movement contributing to the larger impression of the piece as a whole. Strength, elegance, and beauty are the words that come to mind when studying this superb example of Margaret Tafoya’s work.

The bottom of the vase is signed Margaret Tafoya, Santa Clara, N. Mex (see below).

Margaret Tafoya (1904 - 2001) Corn Blossom was born August 13, 1904, at Santa Clara Pueblo.  Margaret learned her skills from her parents, Sara Fina Gutierrez Tafoya and Jose Geronimo Tafoya, who were expert potters. Margaret and her mother were known for their ability to make unusually large storage jars and water jars. She believed the secret to her technique were her polishing stones, which have been passed down through the generations. She taught many of her nine children how to make pottery.  Virginia Ebelacker, Mela Youngblood, Toni Roller, LuAnn Tafoya, and Esther Archuleta are among the long list of Tafoya’s descendants who are or were successful potters. In 1985, Tafoya was one of three New Mexicans selected to receive the Governor's Award, New Mexico's highest artistic honor, awarded for a major contribution to the arts of New Mexico. Her works are included in prominent museum collections worldwide, and she is often listed among the most influential Native artists.

Provenance: this Santa Clara Pueblo Large Blackware Wedding Vase by Margaret Tafoya is from the estate of an Albuquerque resident where it was displayed in her home’s nicho for over 40 years.  What is a nicho?  This is a Spanish word. It is a hollow or cavity in a wall, especially the one that serves to contain a statue, an image, ornament, or pottery vessel.