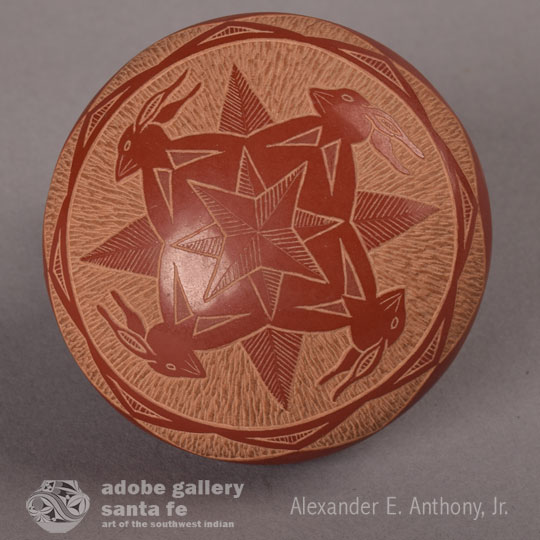 Using sgraffito technique, Santa Clara Pueblo artist Joseph Lonewolf incised four rabbits circling around a series of four-pointed stars on a red slipped pottery surface. The artist has rendered the rabbits with precision as they seem to float above multiple layers of textured stars. The small red seed jar was first carefully shaped and polished to perfection before Lonewolf carved four whimsical rabbits‒each whose bodies blend into geometric stars.

Lonewolf  was born in 1932 at Santa Clara Pueblo, New Mexico. He was the nephew of famous potter Margaret Tafoya.  He started a career as a mechanic and then became a trained machinist, making precision parts with fine engraving.  It was this skill that he used to transfer his talent from mechanical objects to precision-carved pottery. In 1971, Lonewolf returned home to Santa Clara Pueblo and put his skills to making pottery as had been taught to him by his mother, Agapita Silva Tafoya.  His father, Camilio Tafoya, had taken him as a child into the mountains where he witnessed petroglyphs carved into caves and on walls of cliffs. Lonewolf took the lessons of his mother and field trips with his father and combined the two to arrive at intricately-carved designs on pottery.   If any potter has mastered the technique of sgraffito pottery, it must be agreed that it is Joseph Lonewolf as he creates the finest designs in sgraffito ever put on the face of a pottery vessel.

According to Jon Young in the book The Pottery Jewels of Joseph Lonewolf every piece that Lonewolf made had a meaning. Usually it had to do with nature. The small seed pot is signed with Lonewolf's name and wolf’s head hallmark as well as dated 1976. Lonewolf also assigned a serial number to each piece, this one is S66.

Provenance: From a pottery collection in Nevada