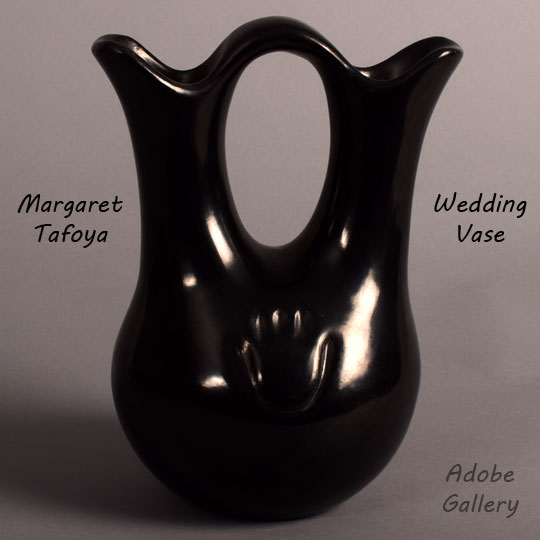 This blackware wedding vase was made by Santa Clara Pueblo matriarch Margaret Tafoya. It is an exceptional example of Santa Clara blackware, made by one of the most significant artists of the twentieth century. Bear paw designs appear, impressed softly into the body of the vase on opposite sides. No additional designs appear, and none are needed. The piece is polished beautifully, as one would expect of a Tafoya piece.

The vase’s form is smooth and seamless. Two tall necks rise from the round body and eventually open up into spouts, which are linked by a curved clay bridge. All of this happens gracefully and naturally; there is no element that feels out of place. Everything here feels like the result of a fluid creative process. This Margaret Tafoya wedding vase is simple, stylish, and as close to perfect on a technical level as one could expect of a handmade piece of art.

The bottom of the vase is signed Margaret Tafoya.

Margaret Tafoya (1904 - 2001) Corn Blossom was born August 13, 1904, at Santa Clara Pueblo.  Margaret learned her skills from her parents, Sara Fina Gutierrez Tafoya and Jose Geronimo Tafoya, who were expert potters. Margaret and her mother were known for their ability to make unusually large storage jars and water jars. She believed the secrets to her technique were her polishing stones, which have been passed down through the generations. She taught many of her nine children how to make pottery.  Virginia Ebelacker, Mela Youngblood, Toni Roller, LuAnn Tafoya, and Esther Archuleta are among the long list of Tafoya’s descendants who are or were successful potters. In 1985, Tafoya was one of three New Mexicans selected to receive the Governor's Award, New Mexico's highest artistic honor, awarded for a major contribution to the arts of New Mexico. Her works are included in prominent museums collections worldwide, and she is often listed among the most influential Native artists.

Provenance: this Santa Clara Pueblo Wedding Vase with Bear Paws by Margaret Tafoya is from a private California collection