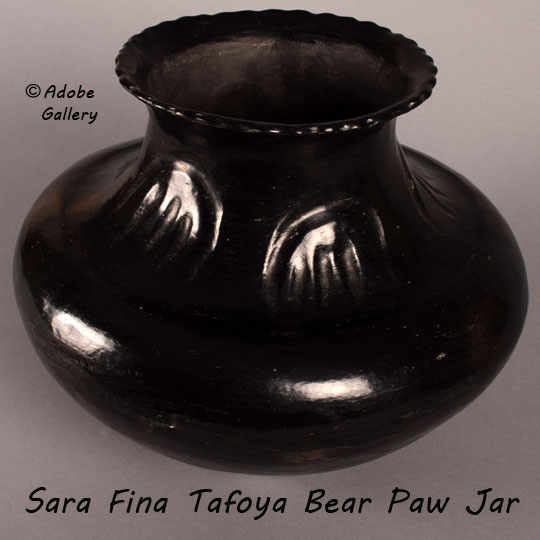 Those who are familiar with the history of pueblo pottery will recognize that this gorgeous blackware jar was created by Sara Fina Tafoya, the influential Santa Clara Pueblo matriarch and mother of Margaret Tafoya. Sara Fina and Margaret are widely considered to be two of the most talented and significant Tewa potters. Their works are enthusiastically sought by museums and collectors around the world.

This blackware jar is an outstanding example of Sara Fina Tafoya's work. The vessel shape is that which the artist preferred and perfected, with a wide rounded body, a strong flared neck, and a fluted rim. At first glance, the design seems simple and elegant. But as the observer looks closer (see image below) and understands that the function of this jar is to carry water, more design elements suddenly appear. It has been suggested that the fluted rim represents rain clouds, and the rain falls and hits right at the shoulder. Often, she'd add a two-tiered shoulder above the midbody; here she chose a more subtle indentation just past the shoulder. Slight variations in form appear, which is typical, and the piece looks stunning from any angle.

Four bear paw impressions appear on the neck. Each is formed by a group of three vertical lines surrounded by a wider U-shaped line. Interestingly, Tafoya inverted the exterior lines on this jar, forming upside down bear paws and setting this jar apart as a unique piece. The gorgeous tone of the polished exterior is perfectly matched to the vessel, and the piece is rich in elegance and beauty.

One of the most famous nineteenth-century Santa Clara Pueblo potters was Sara Fina Tafoya (circa 1863-1950) Autumn Leaf. Tafoya married Geronimo Tafoya and had eight children, a group that included Margaret Tafoya. Sara Fina was an exceptional potter from about 1880 to 1950, making large, magnificent pottery jars, some more than three feet tall. Because she lived and worked into the first half of the twentieth century, her name is familiar to collectors today and her pottery is easily recognizable. One of her signature vessel shapes is the exaggerated-width water jar. Tafoya's works are included in many major public and private collections.

Provenance: this Sara Fina Tafoya Historic Blackware Jar with Upside Down Bear Paws is from a private collection