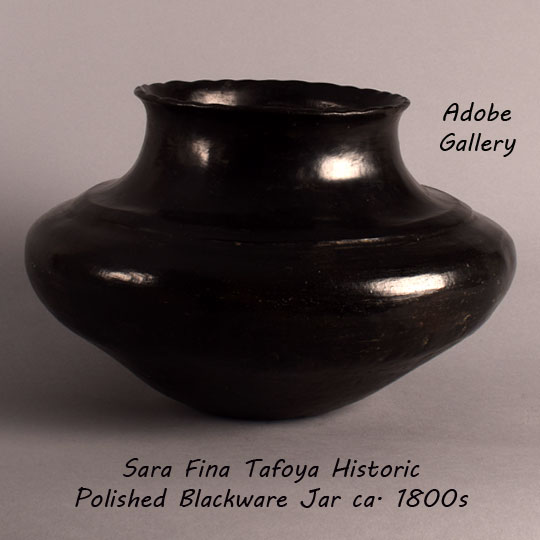 This unsigned blackware jar was created by Sara Fina Tafoya, an influential potter and matriarch from Santa Clara Pueblo.  It is not often that we acquire one of her works, so we are always pleased when one becomes available to us. Those who are familiar with Sara Fina will immediately recognize in this jar the classic shape and subtle design touches that are typical of her work.

The jar’s low, wide form is itself a Sara Fina trademark, as are the fluted rim and “Rainbow Band” of raised clay around the jar’s shoulder.  Her descendants, and the many others who were influenced by her work, would adopt these styles, of course, but Sara Fina’s applications have a particularly appealing elegance.  This is a beautiful jar from one of the most significant pueblo potters.

One of the most famous nineteenth-century Santa Clara Pueblo potters was Sara Fina Tafoya (circa 1863-1950) Autumn Leaf, mother of the equally influential Margaret Tafoya.  Sara Fina was an exceptional potter from about 1880 to 1950, making large, magnificent pottery jars. Some were larger than three feet tall.  Because she lived and worked into the first half of the twentieth century, her name is familiar to collectors today and her pottery is easily recognizable.  One of her signature vessel shapes is the exaggerated-width water jar.

Condition: There is one small rim chip, and the type of abrasions that are typical of a jar from this era.  The jar has been examined under a blacklight and shows no signs of restoration or repair.

Provenance: this Sara Fina Tafoya Historic Polished Blackware Jar ca. 1800s is from the estate of a previous client of ours who had impeccable taste and purchased accordingly.