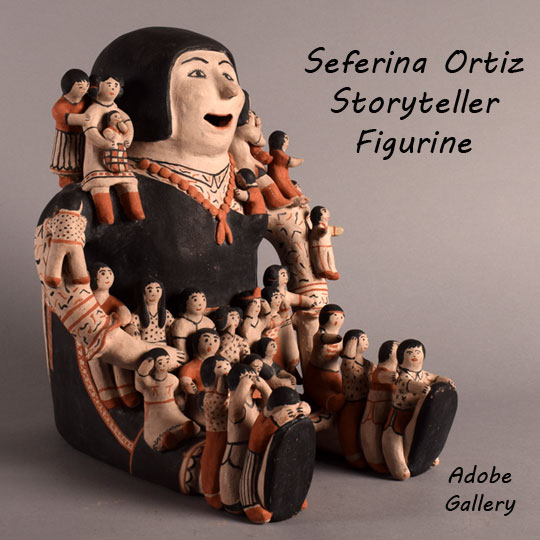 This is absolutely the largest storyteller with the most children that I have seen by Cochiti Pueblo artist Seferina Ortiz. I never knew she made one so large. It was made in the early 1980s. The adult is beautifully dressed in a traditional pueblo manta over a print blouse with lace cuffs. Each of the children is different—different in size and different in dress.  The adult has a warm and happy smile on her perfect face.  She looks like a happy grandmother. The children are wonderful, too.  They are mostly facing forward and appear to be attentive and not distracted.

Seferina Ortiz (1931-2007) is considered one of the matriarchs of the potter population of Cochiti Pueblo.  Not only did she leave a legacy of her pottery, but she also left a legacy in her children—Joyce, Janice, Inez, Virgil, Leon and Angie, some of whom are considered top potters today.

Condition: good condition with minor slip crack on bottom of this figurine

Provenance: this Seferina Ortiz Female Pottery Storyteller with 29 Children is from the estate of a previous client of ours who had impeccable taste and purchased accordingly.