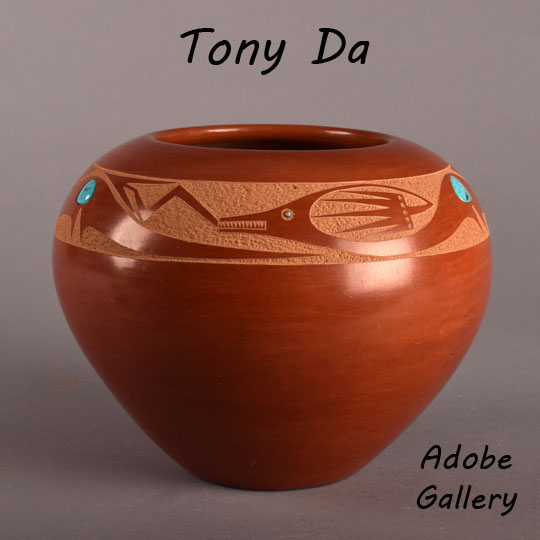 This exceptional redware pottery jar was created by San Ildefonso Pueblo artist Tony Da. As a descendent of Maria Martinez, Da was born into a family of influential artists. He went on to become one of the most significant members of an incredibly talented family. Today, his works rank among the most valuable and sought-after Native American artworks. The strong market for Da's works can be attributed to their beauty, of course, but also to their relative scarcity. Da's potting career was short, and he is known to have completed only 30 pots a year. It is always exciting to have the opportunity to handle one of these rare and wonderful pots.

This sgraffito-etched redware jar, which dates to the late 1960s or early 1970s, is an excellent example of Tony Da’s work.  Its primary design element is a band circling the jar just above its widest point.  This design band uses precise sgraffito etching to create an Avanyu figure.  The Avanyu—etched in reverse, essentially, as its body is made of the jar’s polished surface—is a technical marvel.  Every detail, down to its row of tiny teeth, is as close to perfect as one could hope for in an artwork that is made by hand.  The Avanyu curves gracefully around the jar, standing on four pairs of legs.  Above each pair of legs is an inset turquoise gemstone.  The areas between the legs feature wide rain cloud designs.  A round miniature piece of turquoise serves as the Avanyu’s eye.  The eye and the four larger pieces of turquoise are spaced evenly around the jar.  The etching reveals the jar’s buff clay body, which is stippled, creating a different texture to complement the polished exterior’s smooth sheen.

The jar’s color is a rich, gorgeous red, and its exterior is polished to perfection.  Its shape is excellent.  The base, at just 2-½” in diameter, is narrow, which means that the sides must flare outward widely to reach the 6-½” diameter of the jar’s widest point.  Above this point is the design band, then the polished rim.  There is no neck, no lid, and no elaborate design work here, and none of that is needed.  This is a classic pueblo pot that bears its gifted creator’s distinctive stylistic choices without veering too far from tradition.  We are pleased to offer another pueblo pottery masterpiece from the great Tony Da.  This pottery jar is signed DA on the base.

Tony Da (1940-2008) Thun-Phoe-She (Sun Dew) was a gifted and influential potter, painter and jeweler from San Ildefonso Pueblo.  His father was Popovi Da and his grandparents were Maria and Julian Martinez. Tony Da’s works are among the most collectible pieces of Native art, and not because of his family name.  Tony Da was an innovative genius, whose natural artistic abilities matched—and, in some areas exceeded—those of his ancestors.  Tony Da’s career was unfortunately sidelined by a motorcycle accident in 1982, when he was just 42 years old.  After the accident, he was unable to continue making the elaborate and beautiful pottery jars, bowls, and figurines for which he’d quickly become so well-recognized, but he was able to continue creating works on paper.  Da passed away in 2008 and has come to be regarded as one of the most significant Native American potters.

Condition: Excellent condition with no chips, cracks, restoration, or repair.  Minor wear on the base, which is not uncommon.

Provenance: this Sgraffito Redware Pottery Jar with Turquoise by San Ildefonso Pueblo artist Tony Da was purchased from the Covered Wagon in Albuquerque on January 5, 1971 by a museum director who lived in Missouri.  Passed down to his descendants, who have now offered it for sale.