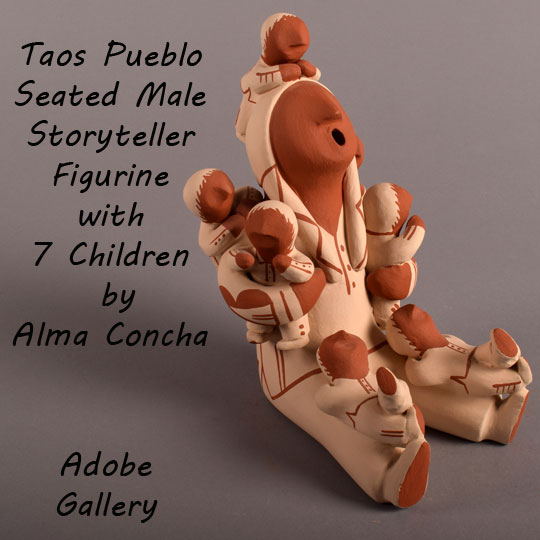 This male storyteller pottery figurine is in the style developed by Alma Loretto Concha when she was married and living at Taos Pueblo.  The face, without painted features, is unique to her.  Alma used a rust red slip for the faces and hands and other decorated sections, placed over a cream color slip for the remainder of the sections.  She always added a design with feathers which are on the back of this adult figure.

Three children are clinging on the shoulders and head of the adult, two are clutched in his arms, and two are casually reclining on his legs.  Overall, the storyteller figurine is charming with their faceless features and casual arrangement.  The figurine is signed Alma, and dates to 1990.

Adobe Gallery purchased this figurine from Alma on 23 June 1990 and sold it to a client from whom we now have it back.

Alma Loretto Concha (1941 – present) is one of six Loretto sisters originally from Jemez Pueblo. Her sisters are Mary Toya, Fannie Loretto, Lupe Lucero, Edna Coriz, and Dorothy Trujillo.  She began learning the techniques of making pottery as a child and has continued during her adult life.  Her first storyteller was made in 1969 after she married and moved to Taos Pueblo.

Alma has been known as Alma Loretto, Alma Concha, and now, Alma Maestas.  In 1979, she was a part of the landmark Albuquerque Museum exhibit "One Space: Three Visions."  Three years later, she was included in an article in National Geographic Magazine.

Condition: this Taos Pueblo Male Storyteller with 7 Children by Alma Concha is in original condition