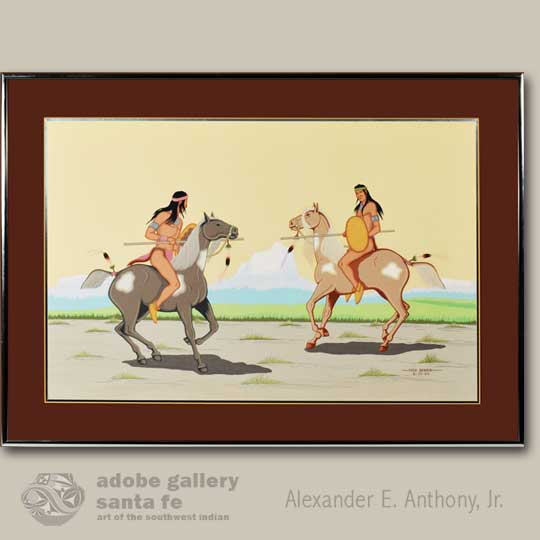 Award winning artist Fred Beaver was praised by Dorothy Dunn in her book American Indian Painting of the Southwest and Plains Areas: "His pictures are adroit, colorful, and decorative in a meaningful manner that commands interest beyond that usually aroused by illustrative art. Beaver should write the stories and legends to accompany these excellent depictions of native scenes. With his comprehensive knowledge of the subject, he should be able to offer a well-rounded and fascinating view of Southeast Indian life." She describes him as "one of the principal Woodland artists."

This excellent untitled painting most definitely fits Dunn’s description.  Beaver’s subjects here—two Indian warriors on horseback, facing each other—are depicted in a warm and attractive manner.  His opaque tempera paints were evenly and consistently applied to the pale yellow paper. His color choices are excellent, too.  Beaver’s primary subjects and the ground upon which they stand are mostly made of earthy grays, tans and browns. Brighter colors—blue and green, here—were used sparingly to create a landscape that feels distant and dreamy.  The aforementioned yellow paper serves as the cloudless sky.

The manner in which this image is arranged is quite elegant.  Both of the horse and warrior duos are pictured in similar positions. The warriors hold their shields in their left hands and their spears in their right hands, turning their upper bodies left to face each other.  The horses’ positions are nearly identical, too, though they face in opposite directions. They’re circling each other, but they’re arranged on paper to appear nearly symmetrical.  Rising up in the background, in the center of the image between the two warriors, is a rock monolith made of white paint. It’s a clever composition made of soft, inviting colors that could work just as well within a collection of modern images as it would alongside traditional works.  When one sees an image like this, it in easy to understand why Fred Beaver’s works are highly regarded by scholars and desired by collectors.

Fred Beaver (1911-1980) Ekalaneewas was a Creek-Seminole Indian painter.  In 1931, he graduated from Eufaula High School where he was an All-State football and basketball player. He attended Bacone College, and in 1935 graduated from Haskell Business College. He worked for the Bureau of Indian Affairs and the Army Air Corps until 1960 when he retired to pursue a career of painting full time.  In 1963, he won the Phillips Outstanding Indian Artist Trophy. He was commissioned to paint several murals in businesses including theThunderbird Restaurant and Motel in Oklahoma City and the Seminole Arts and Crafts Center in West Hollywood, Florida. His awards are too numerous to list here, but several of the most notable are Outstanding Indian of the Year (1979), Outstanding Oklahoman of the Year (1976), and the designation of Master Artist (1973).  Beaver passed away in 1980.

Condition: this Untitled Painting of Two Men on Horseback dated 1952 by Fred Beaver is in excellent condition

Provenance: from the collection of a Texas resident 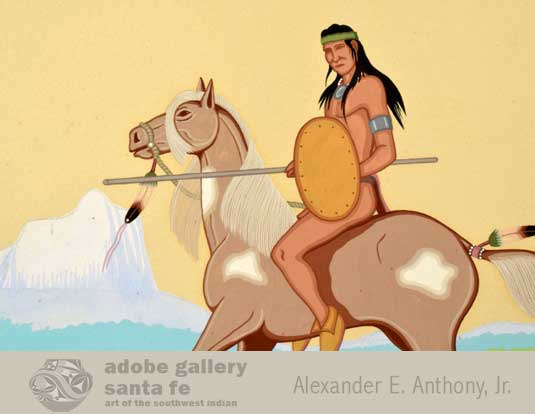