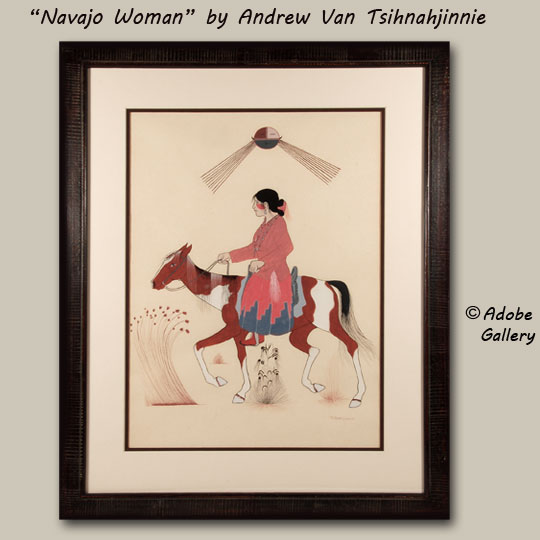 This painting was created by Andrew Tsihnahjinnie, a talented and influential Diné painter. It has the look of an early-career piece, possibly even as early as the artist's Santa Fe Indian School days. Text written on the back of the painting identifies a price of nine dollars, which would be quite a bit higher than those which we see on early Indian School pieces, but it's possible that this piece was completed during that era and sold later.

The "Navajo Woman" is dressed in traditional clothing-velveteen blouse, pleated skirt, and doeskin moccasins. Her hair is tied up in a chonga. Her horse appears to be moving along slowly, as if they are in no hurry. A sun symbol with buffalo horns and rays hangs overhead as a protector of the horse and rider. Tsihnahjinnie's work can be wild and expressive, but this particular piece fits comfortably within the traditional style. Its color palette relies mostly on reds and browns, with touches of blue, gray, and black providing balance. This is a sweet, beautiful image from one of the most significant early Diné painters.

The painting is signed Tsihnahjinnie in lower right. A slip of paper attached to the frame contains a copy of the text written on verso, which reads "Navajo Woman, Tsihnahjinnie, $9.00." The painting is framed under UV-protective glass and a cream-colored mat with a maroon interior band.

"Andrew Tsihnahjinnie, in many respects-incisive interpretation, spontaneity of brushwork, originality of color, vigor of draftsmanship and vitality of action-had no equals among the artists of the (Santa Fe Indian School) studio and perhaps few superiors among modern painters. If equanimity and self-confidence were to rule his artistic abilities, Tsihnahjinnie might well be one of America's top-ranking painters. In the brief seasons when he felt freed to paint the things he knew so deeply, without troubled concern for doing otherwise, his work attained a trenchant beauty, unique in modern art." [Dorothy Dunn, 1968].

Andrew Van Tsihnahjinnie (1916 - 2000) was a Diné painter who was born near Chinle, Arizona. He attended elementary school at the Indian School at Fort Apache but ran away and returned to the reservation. He then attended school in Santa Fe and became a student of Dorothy Dunn at the Santa Fe Indian School. He was an excellent student and was known to have stayed in the studio painting until forced to return to the dormitory. Following his graduation, he went to work as an illustrator for the Indian Service. Tsihnahjinnie's works are included in many prominent public and private collections, and are published in most of the major texts which relate to Native painting. Tsihnahjinnie passed away in 2000 and the video we reference was done on October 9th, 2000.  So, it was made just before his death.  The video was done by Kathy Flynn, who is the Executive Director of the National New Deal Preservation Association and the New Mexico Chapter of the NNDPA (clicking will take you to another website).

Provenance: this Watercolor Painting titled "Navajo Woman" by Andrew Van Tsihnahjinnie is from a private collection