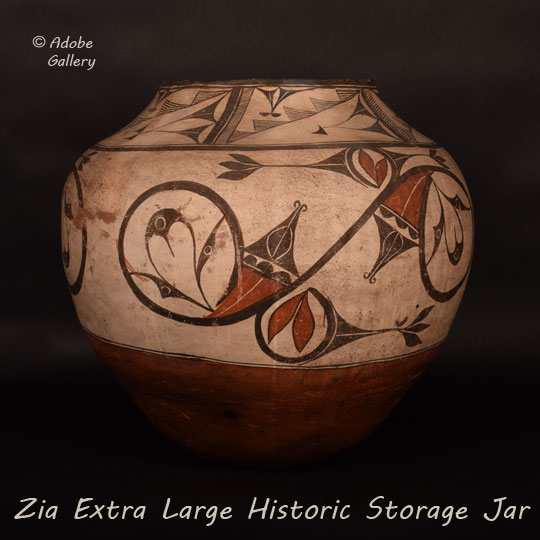 Overall, Zia Pueblo Polychrome pottery jars are more pleasing and precise in their execution than those of the earlier period. This jar combines the best qualities of Zia Polychrome with the finest designs of the Trios Polychrome period.

This storage jar has the globular shape of Trios Polychrome jars rather than the high-shoulder olla shape of Zia Polychrome jars; however, it is not likely that this jar is as old as the 1860 end of Trios Polychrome. It is likely that it was made by a potter who was experienced with the earlier shape and continued its use into the later period. A potter who was young in 1860 could have continued making pottery for another 60 or more years, continuing as she was taught and with which she was experienced.

The spiral design on this jar starts with the spiral circle in an up position and runs to a second spiral in a down position. Nestled in the wedge of each of the spiral circles is a polychrome element that has been designated as a feather. The black portion of this design, with the pair of curved tips has been described as a seed pod, and the red portion of the design is a feather.

The interiors of the spirals are filled with a three-part design resembling a floral element. These interior designs have been designated as "trident fillings of spirals". Riding piggyback on the line connecting the two main spirals are two minor spirals, each with a pair of black-outlined red leaves or ovals. This is seen on other circa 1900 Trios Polychrome design jars.

It is traditional to expect to see stylized feather caps as the single motif around the neck of the jar. This jar, however, has none of these on the neck. Rather, the potter provided a display of solid black, split black, and black fine line elements.

Condition: UV examination reveals no breakage, but some overpaint and surface abrasions of the slip.

Provenance: this Zia Pueblo Extra Large Historic Storage Jar is from a private collection from the Midwest