Zia Pueblo Painting of a Male Dancer by Rafael Medina 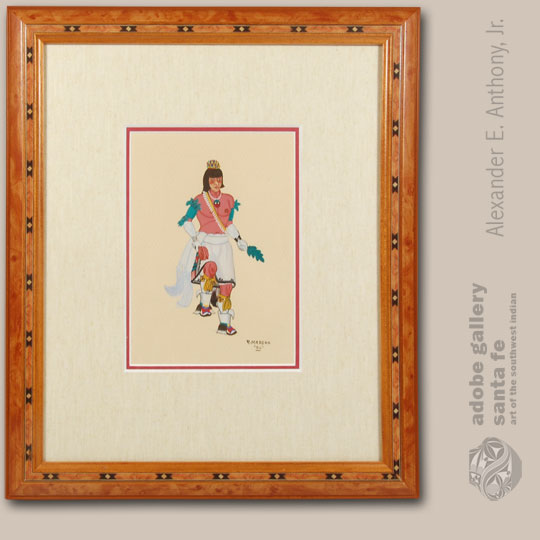 Clara Lee Tanner, in her book Southwest Indian Painting, stated that Rafael Medina studied at Albuquerque under Velino Herrera (Ma Pe Wi) and José Rey Toledo.  She does not state that he attended the Albuquerque Indian School but perhaps that is where he studied before entering the Santa Fe Indian School.  Neither Dorothy Dunn nor Tanner is clear about that.  Medina attended the Santa Fe Indian School after the departure of Dunn and during the tenure of art teacher Gerónima Montoya, probably entering school in the early 1940s.  Following high school, he attended the Institute of American Indian Arts (IAIA) in Santa Fe.

Zia Pueblo artist Medina illustrated early in his life that he was a talented painter, following in the footsteps of Zia’s most famous painter of the time, Ma Pe Wi.  This painting by Medina is softer in tone than his later works.  His later works are brighter as if painted with acrylic paints.  In traditional Santa Fe Indian School style, he painted the main subject without ground plane and background.  One cannot be not impressed with the amazing detail of the costuming of the dancer.  It is such detail that gave Medina his reputation.

Condition:  this Zia Pueblo Painting of a Male Dancer by Rafael Medina appears to be in original condition