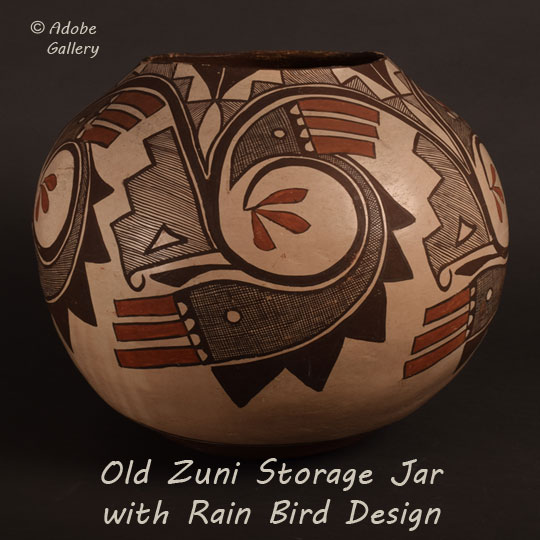 This exceptional storage jar was created early in the twentieth century at Zuni Pueblo. The pottery vessel has a globular shape with a rim that turns upward gently. Its walls are a bit thicker than the typical OLLA, which makes sense given the size of the vessel. It is not often that we acquire a jar of this size from Zuni, and it's even more rare to come across a large piece that is of such high quality.

The painted designs are similarly strong. One line circles the jar, serving as the core of a design that repeats five times. With each repetition, it curves down from just below the rim and then reverses its course, forming a spiral. The line splits in two as the spiral design begins, curving back up toward the rim and eventually continuing into the next instance of the pattern. A variety of traditional motifs emerge from each spiral, forming a beautiful composition that feels perfect for this large vessel. There is a wonderful feeling of motion and movement in this never-ending pattern, and it appears to have been created and executed with incredible skill and confidence.

This jar has been identified through recorded documentation and photographs as having been made around 1915 by Lawsaiyateseta (or Kaiyutsalugtetsa) Lonkeena (1881-1958).

The following information is from the book The Pottery of Zuni Pueblo by Dwight P. Lanmon and Francis H. Harlow, Museum of New Mexico Press, 2008. I quote:

"The jar shown in Figure 32.19 is decorated with dynamic curvilinear designs that may reflect Hopi influence. The spiral designs relate to a Zuni motif known as the Rainbird, but on the rendition in Figure 32.19 the spirals rotate in a counterclockwise direction, the reverse of almost all Rainbird designs.
"Jars with this design are not found in either the Bureau of American Ethnology (Smithsonian) or American Museum of Natural History (New York) collections, suggesting that it is a post-1912 innovation. The earliest collection date for an example of this design that we have found is for a jar acquired for the Indian Arts Fund (Santa Fe) in 1926: because it shows considerable wear and water-mineral buildup from use as a water jar, we speculate that it was perhaps a decade old when it was collected.
"The jar illustrated in Figure 32.19 shows accumulation of salts from water on its sides; we speculate that it was about a decade old (or less) when it was acquired by the Indian Arts Fund in 1928. The design may have been originated by the potter Lawsaiyateseta (or Kaiyutsalugtetsa) Lonkeena (1881-1958), who is shown holding a jar with the same design in an undated photograph of about 1930 (Figure 34.18). Two more jars with similar designs are shown in Figure 35.12. Another jar of similar design, but with leaves at different positions within Rainbird figures, is illustrated in Figure 34.19."

"Lawsaiyatesetsa (or Kaiyutsalugtetsa) Lonkeena, the woman referred to by many at Zuni as Mrs. Lonkeena, is pictured (p.509). She was recorded in the 1916 Pueblo census as Isie Kaiyutsalugtetsa (born 1881), wife of Longkeena (born 1866). Her parents were identified as Nashe (born 1851) and Layawtsalugtetsa (born 1853). Similar information is also recorded in the 1920, 1924, 1930, and 1934 censuses, but Lonkeena's wife's name is there given as Laysaiyatesetsa. Lonkeena was the brother of the potter Lawatsa Paylusi." [ibid]

Provenance: this Zuni Pueblo 1915 Storage Jar with Rain Bird Design is from the estate of a collection from Illinois