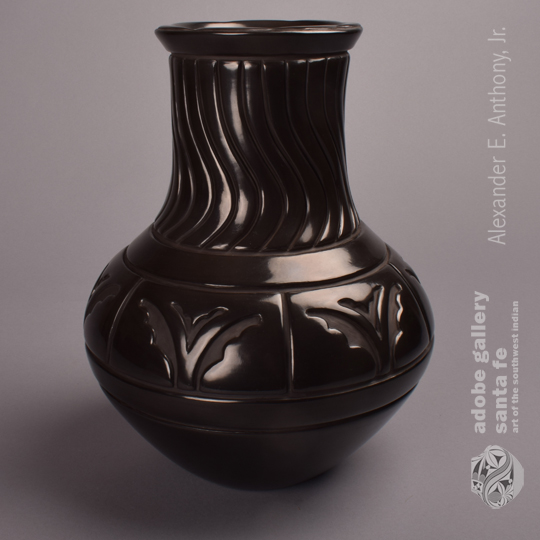 This is an amazing jar with an enormously beautiful design concept and execution. The artist demonstrated her mastery of the process.  The top of the rim, which in most cases is left without decoration, has been decorated in the shape of a flower on this jar. The long and graceful neck of the jar is filled with parallel S-curve bars with beautiful swirls.  The bulbous body of the vessel has carved designs resembling kiva steps or clouds. Below that panel of designs is a polished underbody. The jar is absolutely spectacular.

Linda Tafoya formerly signed her pottery Linda Tafoya Oyenque, now she signs as Linda Tafoya-Sanchez.  Same person, same beautiful pottery. She is a daughter of Lee and Betty Tafoya and granddaughter of Margaret Tafoya. She credits her aunt Mary Esther Archuleta for training her to be a potter. Sara Fina Tafoya seems to have set the standard for members of her family and their output of black pottery.  All the family members produce magnificent pottery.