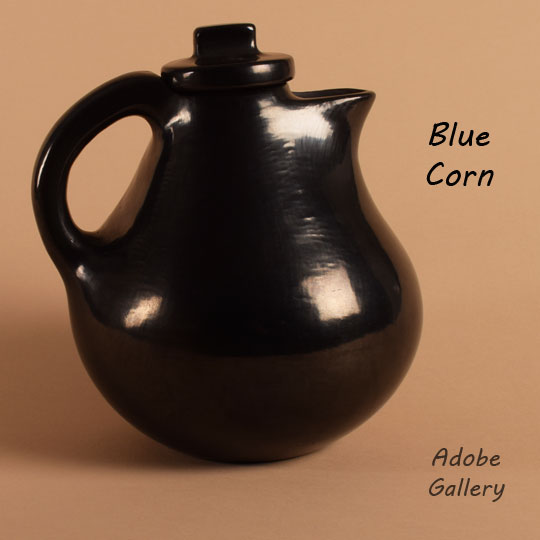 This pottery pitcher was made by Blue Corn, a notable San Ildefonso Pueblo artist. We’ve handled dozens of Blue Corn’s pieces in the past, but we’ve never seen one like this. It’s a pitcher with a rounded handle, a lid, and an open spout. These elements sit comfortably at the top of the beautifully shaped vessel, which uses a round, bulbous form as the base for a conical upper body. As far as form goes, this is an exceptional piece of pottery.

Blue Corn wisely chose to leave this piece unpainted, instead focusing her attention on creating an exceptional polish. The slip was treated consistently and with great care, resulting in a glossy, reflective look. Watching the piece play with the light around it is most enjoyable—blackware pieces often display interesting tonal variations when moved from room to room or light source to light source, but this highly polished piece feels particularly lively as it interacts with new environments. This is a unique, beautiful example of Blue Corn’s pottery. Crucita Gonzales Calabaza (1921-1999) Blue Corn was born at San Ildefonso Pueblo. She was encouraged by her grandmother, at an early age, to "forget school and become a potter." She went on to become one of the greatest and most versatile San Ildefonso ceramicists. She made pottery for over 60 years, working in black, red, and polychrome, using a variety of forms. Blue Corn’s house was located across the plaza from that of Maria Martinez, but there was no competition between the two artisans. Blue Corn was one of the most honored of twentieth century potters. She received the 1981 New Mexico Governor's Award—New Mexico's highest artistic award—and she was acclaimed for her artistic accomplishments in the Wall Street Journal and AMEPNKA, a Soviet Union journal. She won awards at State Fairs, Indian Market, and many other notable exhibitions.

Provenance: this Blue Corn Polished Blackware Pottery Pitcher with Lid is from a private Illinois collection