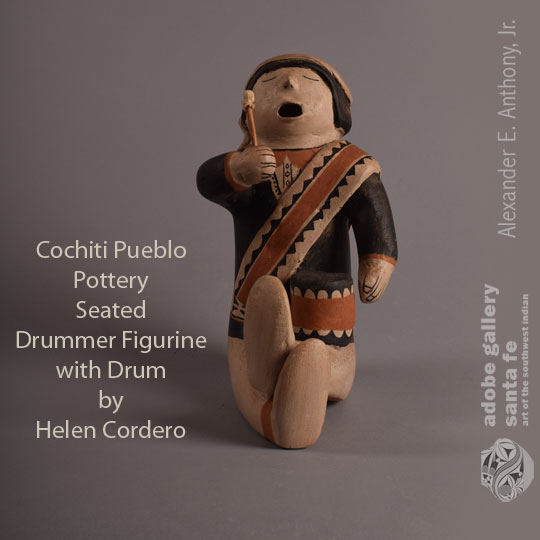 This Cochiti Pueblo figurine represents a pueblo drummer and chanter.  He is holding his drumstick up in preparation for dropping down on the drumhead.  His eyes are closed and his mouth open while chanting. The impetus for this figurine is the traditional Cochiti drum maker.  Cochiti men are known as the finest drum makers and their drums are in use at other pueblos.

Helen Cordero received her inspiration from a number of individuals.  Her first influence was from her husband’s aunt, Grandma Juana, who told Helen and her husband’s cousin, Juanita Arquero, to make pottery.  “You don’t have to buy anything: Mother Earth gives it all to you,” said Grandma Juana. Juanita and Helen took her advice and started making pottery but Helen’s bowls and jars just did not satisfy her.  They were always crooked and terrible. It was then that Helen received her second influence— that of Juanita, who told her to start making animal and human figurines, which she did.

Helen was 45 years old in the 1950s when she started making pottery.  Her six children were raised and gone and she had time to pursue a career.  Helen, following the advice of Juanita, started making frogs, birds, animals, and, eventually, little people.  The two potters showed their wares at Santo Domingo Pueblo feast days one year and folk art collector Alexander Girard bought all of Helen’s figurines.  He asked Helen to make more and larger ones and bring them to him. He became her third influence. She followed his advice and he then commissioned her to make a 250-piece nativity set.  He also asked her to make a larger figure with children.

Another influence on the figurines of Helen was her husband, Fred Cordero.  Fred was a drum maker and a leading drummer and singer for the Pumpkin Kiva (clan).  Helen was inspired by Fred and started making drummer figurines. This is an early drummer figurine by Helen.  He has the warm cream slip from those figurines of the early 1970s. His shirt is painted black and he has a blanket strip over his left shoulder.  He wears a woven belt around his waist and a headband and carries a drumstick. A drum rests on his left leg and his legs are crossed.

Provenance: from a gentleman in Arizona