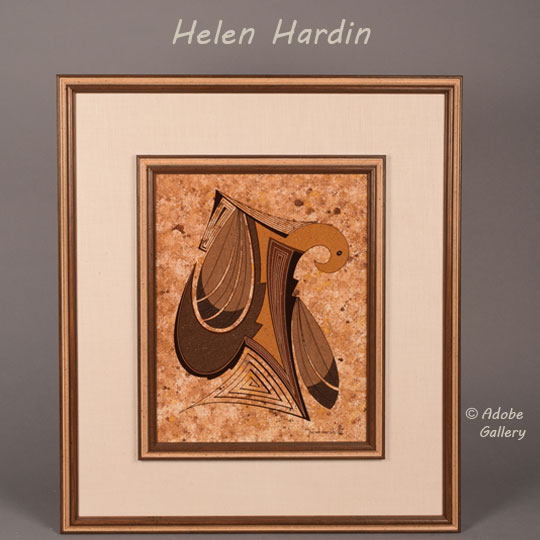 "Hopi Sky Guardian" is an original acrylic painting by Helen Hardin of Santa Clara Pueblo. Hardin often incorporated symbology from outside of Santa Clara in her work. Here, she interprets Hopi imagery, as she did in multiple paintings and etchings during her short but impactful career.

A gorgeous abstract form appears in the center of the image, with a bird's head being the most clearly defined element. Feathered wings, which might suggest a similarity to those of a moth or another insect, hang down from both sides. Triangular spirals and jagged-edged forms nod to prehistoric designs.

Hardin used a mostly monochromatic color palette for "Hopi Sky Guardian," creating the majority of the painting using varying shades of a beautiful gold tone. It appears as a soft yellow, a brown tone, and everything in between, creating rich depth and beautiful texture within the background's wonderful wall of gold clouds. Maroon, black, and gray tones were used sparingly and effectively to add strength and definition to the central form. This is a truly exceptional example of Helen Hardin's work.

The painting is signed Tsa-Sah-Wee-Eh. It is in the original frame, which mounts a wood frame on a fabric backing within a larger frame. The title is written on the frame's paper backing.