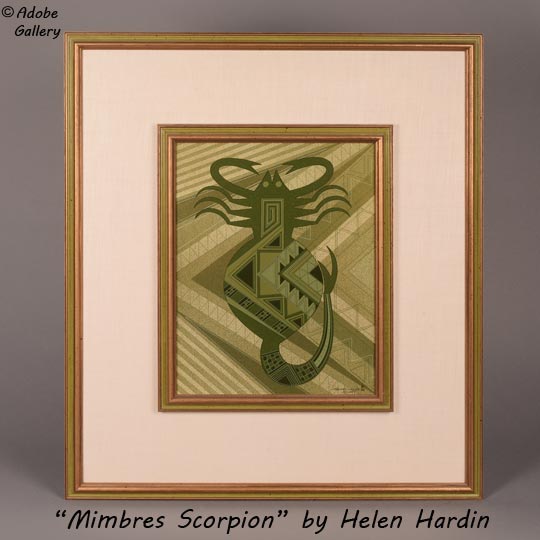 "Mimbres Scorpion" is an original acrylic painting by Santa Clara Pueblo artist Helen Hardin. The painting dates to 1977, when it was entered in competition at the New Mexico State Fair. "Mimbres Scorpion" received the First Premium prize, and the blue ribbon and entry tags still hang from the back of the frame.

With this piece, Hardin stayed close to Native tradition by creating an interpretation of prehistoric Mimbres imagery. A Mimbres bowl in the collection of the Metropolitan Museum of Art provides a prominent early example of this same scorpion design. The bowl is dated to A.D. 950-1150.

With "Mimbres Scorpion," Hardin offered a fine tribute to the artworks of her ancestors. The scorpion itself imitates earlier forms beautifully while also incorporating the artist's own stylistic preferences. The remarkable background accomplishes the same feat within its intricate web of razor-thin lines and atomized paint droplets. In an ambitious and inventive move, Hardin wove the creature and its habitat together by allowing the background pattern to merge with the scorpion's body. All of this remarkable work was completed using various shades of green, which further unifies each element into a cohesive and beautiful whole.

The painting is signed Tsa-Sah-Wee-Eh and dated 1977. It is in the original frame, which mounts a wood frame on a fabric backing within a larger frame. The title is written on the frame's paper backing, and the aforementioned blue ribbon and entry tags are attached to the wire.