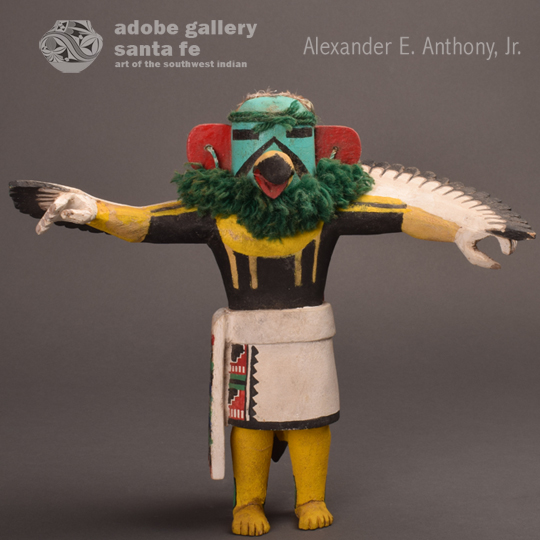 “The eagle is the strongest and bravest of all birds. For this reason, Native Americans have chosen the eagle and its feathers as a symbol of what is highest, bravest, strongest and holiest.

For the Hopi, the eagle is an all-important bird.  They believe that the eagle embodies the spirits of their ancestors.  In Spring, it is not unusual to see eaglets tethered on Hopi rooftops.  They had been captured by Hopi youth who climbed up to the nest to take the baby eagles home where they were treated with respect.  They would then be given baby presents and nursed tenderly. The eaglets were fed until Niman ceremony in mid-July after which time they would be sacrificed as part of the ceremony. After Niman, the katsinas would depart the Hopi villages and return to the San Francisco Peaks near Flagstaff, Arizona, where they would remain until winter.  After the departure of the katsinas, the Hopi would then gently suffocate the now somewhat grown eagles whose spirits would then carry the Hopi’s prayers for rain to the ancestral katsinas. The eagles would then be buried in a special cemetery after their feathers were removed and saved for future purposes.

Eagle Katsina dolls might be considered one of the most important dolls produced by the Hopi.  Making a katsina doll is not something done lightly by most Hopi men. Even if being made for sale, the doll is made with respect and in honor of the ancestral spirits.  The dolls are still made to be given to Hopi girls as gifts from the Katsinas during ceremonial occasions. The fact that they are also made to be sold does not diminish their importance.

This Eagle Katsina doll appears to date to the mid-twentieth century, based on the yarn ruff around the neck.  Fortunately, the wings were carved from wood which is responsible for their good appearance. Real feathers would have deteriorated badly by now.  The body proportions are to scale. There is an embroidered sash hanging on the right and a sun shield and fox tail across the back of the doll.

Condition: very good condition for its age.  Both feet have been broken and glued

Provenance: this Hopi Pueblo Mid-twentieth Century Kwahu or Eagle Katsina Doll is from a gentleman in Santa Fe