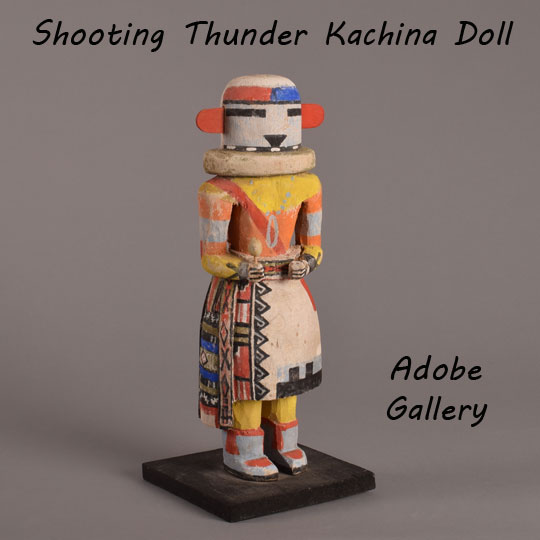 The Umtoinaqa Katsina, known as the Shooting Thunder Katsina, acts as a guard or policeman during the Bean Dance.  He guards the perimeter of the dance plaza to keep unsuspecting intruders out of the way.

This representation of Umtoinaqa dates to the first half of the twentieth century, probably circa 1940s.  Although recognizable as the Umtoinaqa Katsina, the body paint is not according to published descriptions of this katsina.  He carries a rattle here but should have a bullroarer which he uses to create the sound of thunder.  He should have four crossed feathers on his head and a double warrior’s bandolier over his chest.

According to the consignor of this doll, and documentation on some from this same collection, these were the property of the Fred Harvey Company Advertising Department in Chicago.  How they were used by the department is not known, but presumably they were used in advertising and for publicity.  This one, and others in the collection, was mounted on a square black wood pedestal with screws from the underside into both feet.  This is a known procedure of the Company.  It is quite likely that modifications from published accounts of katsinas was purposely done by the carvers because of the intended advertising use by the Company.  These changes do not detract from the desirability of the dolls.  The connection with the Fred Harvey Company adds to the desirability.

It is not unusual for carvers to object to making accurate representations of katsinas when they know they are being sold or used for other than Hopi purposes.  Even those of us who have witnessed Hopi Katsina ceremonies do not fully understand what is going on and it is probably correct that we do not.  The Hopi religion is not easy to describe or understand if one is not a Hopi.  It is a religion based on clan membership, with relations based on the clan of the mother.  Those members of a clan are responsible as guardians of their ritual knowledge and to the overall duties of the Hopi religion, a religion that incorporates supernatural spiritual beings called katsina.

The katsinam are the spirit beings who live with the Hopi for six months every year.  They arrive on the Hopi mesas in December, and their numbers increase in February, the time of the Bean Dance or Powamu. They depart from the Hopi mesas in July, after the Home Dance or Niman ceremony. During their six-month visit, they perform ceremonial functions and public dances at all the villages.  They exist through the men of the villages who impersonate them during their stay.

The Hopi have an agreement with the katsinam that they will honor them with dances and ceremonies in exchange for what the Hopi need to subsist—rain, good crops, fertility for humans and crops, and overall survival.  This exchange is mutually beneficial. The Hopi also make dolls in the likeness of the katsinam, not as items of curiosity, but as personifications of the katsina spirits. These are then presented as gifts for the appropriate behavior of the children.

The katsina dolls are presented to the females by the spirits as personal gifts to award virtuous behavior in a public dance.  The first katsina dolls appear in mid-February during the Powamu. The katsinas dancing in the plaza at that time bear beautiful katsina dolls, and other gifts, for the Hopi people.  Generally, girls are presented with katsina dolls, and boys are given rattles, bows and arrows, lightning sticks and other items. The gifts are considered to be from the katsinam and not from the Hopi men who actually carved or made them.  The gift could have been made by a father, brother, uncle, or clan relative, but the presentation is from a dancing katsina at the time. That is the reason that dolls made for this purpose are never signed with the name of the maker.  Only modern katsina dolls made to be sold are signed by the maker.

Condition: very good condition with some paint abrasions from handling.  This doll has penciled on the back of the Hopi sash 41315 and underneath the kilt 75.00.

Provenance: this Hopi Umtoinaqa Katsina, Shooting Thunder Kachina Doll is from the collection of a resident of Washington