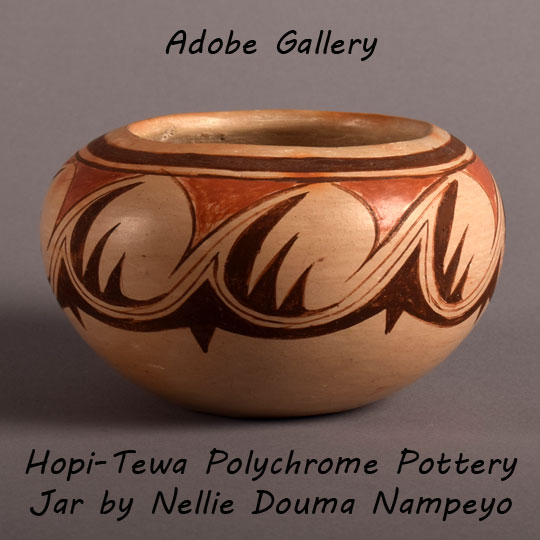 This small Hopi-Tewa pottery jar has an energy of motion—the massive continuous line of body design has a dynamism of wave after wave crashing in the ocean.  Although nowhere near the ocean, artist Nellie Nampeyo created such an effect without intent of doing so.  The design is most likely one from her Sikyatki heritage or from her creative artistic mind.  The design encircles the body without a break in continuity. The only other element of the use of pigment is around the rim.  The jar is signed Nellie Nampeyo on the underside. Nellie Nampeyo, Hopi Pueblo, was one of three daughters of Nampeyo and Lesso.  She was between the oldest daughter Annie and the youngest Fannie.  She too was a potter and she lived to be 82 years old.  Nellie was taken to the Grand Canyon, when just a child, when her mother was convinced to spend the summer there at the newly constructed "Hopi House" built by the Fred Harvey Company.  Nampeyo was there to demonstrate pottery making for tourists but the whole family was intended to show the way the Hopi lived.

In 1910, the business community in Chicago sponsored a United States Land and Irrigation Exposition in the Chicago Coliseum to draw attention to modern machinery as contrasted to what was considered primitive techniques of native cultures.  Ever aware of an opportunity to lure travelers to the southwest, the Santa Fe Railway commissioned a brown stucco pueblo style house on-site to be inhabited by Indians from Hopi.  Of course, Nampeyo was requested to represent the Hopi as the pottery maker, and her daughter Nellie, who was about 16 at the time, accompanied her parents on the Santa Fe train to Chicago.  Nellie was perhaps one of the very few young Hopi who had spent a summer at the Grand Canyon and ridden a train to Chicago.

Nellie Douma Nampeyo, Ta-way “Sweet Corn Meal for Bread,'' was born in 1896 and died in 1978.  She was the mother of Marie, Clara, Vernon, Lindberg, Augusta, Zella, Helen, and Edgar.

Condition: this Hopi-Tewa Polychrome Pottery Jar by Nellie Douma Nampeyo is exceptionally good condition with some abrasion to pigment

Provenance: Purchased by Rick Dillingham from Nellie Nampeyo in January 1976. Sold by Dillingham through Mudd-Carr Gallery in Santa Fe in 1979 to Jim and Barbara Kramer. Sold May 11,2001 at the exhibit "Nampeyo of Hano and Her Daughters" at Adobe Gallery Santa Fe. This was the gallery’s inaugural exhibit after moving from Albuquerque to Santa Fe.