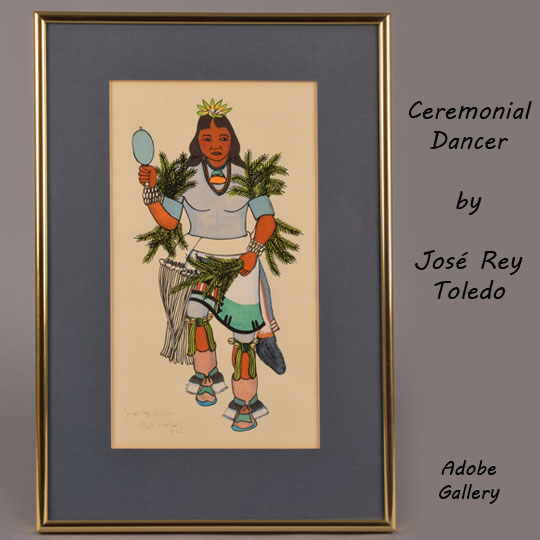 This original painting was created late in life by Jemez Pueblo artist Jose Rey Toledo.  It is dated 1992—just two years before the artist’s passing.  In this piece, a pueblo man dances directly toward the viewer.  In his left hand, he holds an evergreen bough.  His raised right hand holds a rattle.  Soft variations of a variety of cool tones form the majority of his clothing, while warmer tones serve as accents.  Toledo’s style is unique and appealing.  In this image, it feels particularly refined.   By the time he completed this image, he’d painted countless ceremonial dancers; those years of experience are evident in the painting’s gently alluring nature.

The painting is signed Jose Rey Toledo, Best Wishes! 1992 in the lower left.

José Rey Toledo (1915-1994) *Towa, from Jemez Pueblo, was a man of many interests and talents.  He is listed as having been an art instructor, education health specialist, administrator of Indian health programs, actor, educator, lecturer, muralist, and painter.  It is this last category—painter—that is of particular interest to Adobe Gallery. His interest in painting was sparked by his cousin Velino Shije Herrera (Ma Pe Wi) of Zia Pueblo. Toledo attended the Albuquerque Indian School in the 1930s, then went to the University of New Mexico.  By 1955, he had obtained a Master’s Degree. After his time at UNM, he served as head of the art department at the Santa Fe Indian School. He obtained a Masters of Public Health degree from the University of California Berkeley in 1972.

Toledo painted infrequently while pursuing his degrees.  Today, it is rare to find his works available on the market.  The majority of his paintings are traditional pueblo in style and subject matter—single or group dance figures and village scenes. Usually, the dance figures show a great deal of activity. Generally, he did not paint background scenes, just the flat figures against a plain background.  Despite not being as prolific as his contemporaries, he is highly regarded by collectors. The Museum of Indian Arts and Culture in Santa Fe, New Mexico, mounted a retrospective of his works in 1994, just months before he passed away.

*Towa or Jemez: the language spoken by the Puebloan people of Jemez.

Provenance: this Jemez Pueblo Painting of Ceremonial Dancer by José Rey Toledo is from the large collection of an Albuquerque family