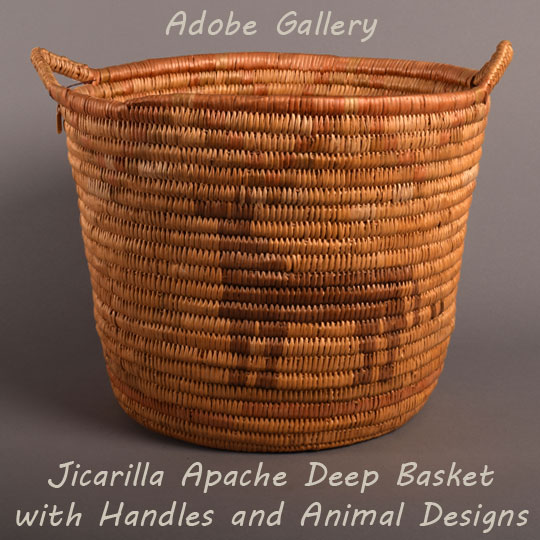 This large and deep Jicarilla Apache basket is typical in shape and size of most Jicarilla functional baskets.  They are used for gathering fruit or nuts or other materials and used in household chores as needed. They are very functional and very attractive.  They were also made to satisfy a commercial market.

All Jicarilla baskets are of coil weave, usually of sumac, but sometimes of willow. They generally use a five-rod bundle or foundation, resulting in thick coils with a massive feel, but the number of rods is difficult to determine when they are covered with the outer layer of weave.  Commercial dye is generally used for design and those strong colors fade to a beautiful mellow shade over time.

The designs are generally stronger on the interior because fading is less.  The interior bottom design is a red circle of four coils with four stepped elements possibly representing the four cardinal directions.  Outlining the red design is a similar one executed in black.  There is what appears to be a weaver’s pathway line from the first coil through the red design.

Two coils encircle the basket near the bottom and provide a ground plane for the four donkeys—two in black and two in red.  The black donkeys are still very visible, but the red ones are barely visible due to fading.  Apparently, the red dye fades more severely than the black.

The rim is red and there are pendant upside down triangles around the entire circle.  For convenience, the weaver provided two handles on the basket.

The Jicarilla Apache are known to have had contact with Plains Indians at some point in their history. They made raids on the Plains Indians but always returned to their mountain home.  They went on buffalo hunts and raids for horses and lived in teepees covered with skin or cloth, and they made parfleches like those of the Plains Indians.

They also had contacts with Puebloan peoples and is where they learned their agricultural knowledge and possibly learned pueblo basketry techniques.  Yet, they were and are Apache and their lifestyle adheres closely with that of Apache tribes.

Jicarilla Apache basketry covers a long span of time, but little is known of their work before they were settled on a reservation in 1887 in Northern New Mexico.

Condition: good condition with fading of the dyed parts

Provenance: this Jicarilla Apache Deep Basket with Handles and Animal Designs is from the estate of a Santa Fe resident