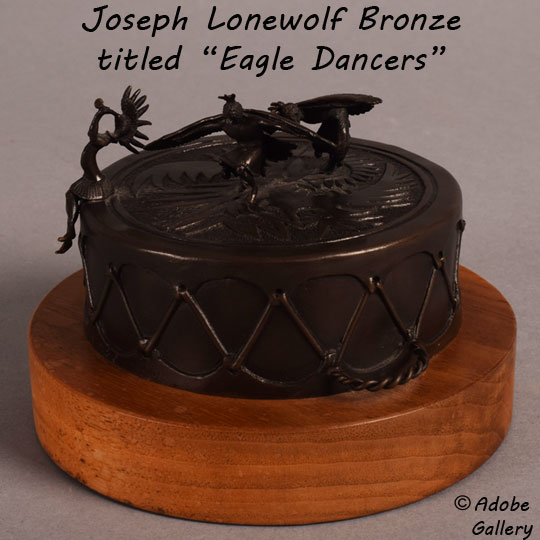 This bronze sculpture was created by Joseph Lonewolf, a Santa Clara artist who is recognized most often for his intricately carved pottery. Lonewolf began making bronzes in 1974, and he was likely one of the first pueblo potters to do so. By this time, his pottery sales were quite successful, and he achieved similar success with his bronzes. "Eagle Dancers" was completed in 1978 in an edition of 16.

A large pueblo drum is turned on its side, serving as the platform upon which two Eagle Dancers perform their ceremony. A flute player is perched nearby on the edge of the drum, leaning back, and pointing his flute toward the sky. Lonewolf's well-documented skill with precisely carved figures translates well to the bronze medium; the figures here are small but detailed and their movements feel natural. Both figures—the Eagle Dancer and the flute player—were depicted on Lonewolf's pottery as well. Sculpture From the Collection of George Terasaki [SOLD]
by

RARE “Indian Dances” and Their Meaning [SOLD]
by