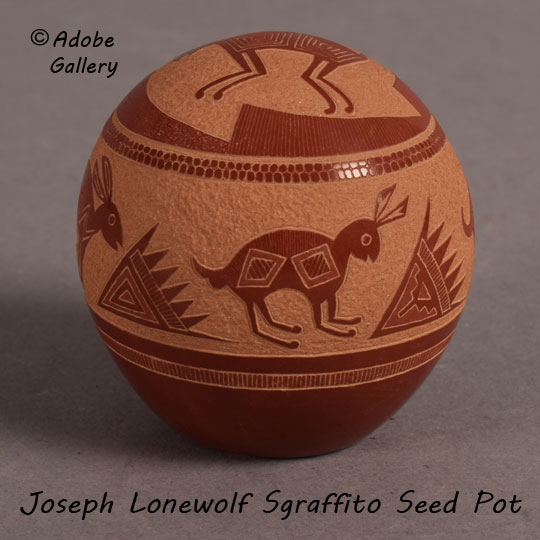 This intricately carved miniature pottery seed pot was made by Santa Clara Pueblo artist Joseph Lonewolf. It is an excellent example of the sgraffito style, which Lonewolf popularized in the 1970s. The gorgeous red tone of the polished slip is complemented beautifully by the tan color of the carved areas. The carved designs are similarly appealing, and quite impressive on a technical level. Five Mimbres-influenced rabbits are carved in relief around the pot's exterior. Each figure is unique and beautiful. The designs set within each figure vary, as do the positions in which the animals appear, adding movement and energy to the piece. Four rabbits appear in a continuous band around the middle of the pot, while a fifth is centered around the top. Intricate design elements appear around the rabbits, framing their movements within a well-balanced larger scene. An additional design featuring a dragonfly appears on one side, just underneath the lowest framing band.

The bottom of the pot has the artist hallmark symbol and is signed Joseph Lonewolf, HO6C9, 1979.

Joseph Lonewolf (1932 - 2014) was an artist from Santa Clara Pueblo. Lonewolf was a nephew of Margaret Tafoya. He started a career as a mechanic and then became a trained machinist, making precision parts with fine engraving. It was this skill that he transferred from mechanical objects to precision-carved pottery. In 1971, Lonewolf returned to Santa Clara Pueblo and put his skills to making pottery as had been taught to him by his mother, Agapita Silva Tafoya. His father, Camilio Tafoya, had taken him as a child into the mountains where he witnessed petroglyphs carved into caves and on walls of cliffs. Lonewolf took the lessons of his mother and field trips with his father and combined the two to arrive at intricately-carved designs on pottery.