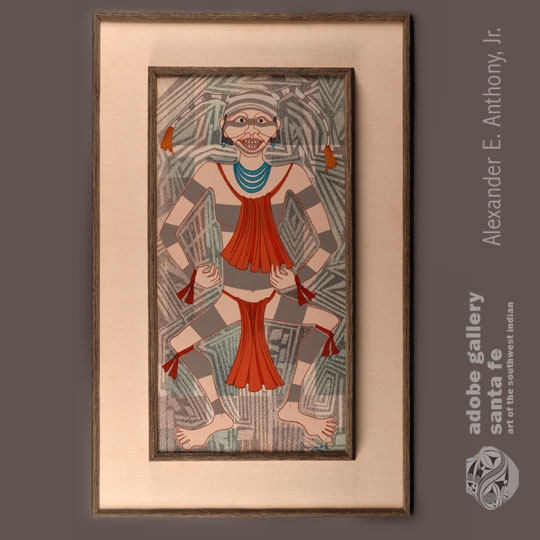 This acrylic painting by Santa Clara Pueblo artist Helen Hardin is titled “Happiness in Grey Stripes.”  According to text written on verso by the artist, the piece was completed on August 19, 1976. Hardin’s subject here is a Tewa clown, dancing, facing the viewer directly.  The image—like many others from the same period, most of which featured animals—is clearly influenced by Mimbres designs. One of Hardin’s greatest strengths was her ability to create fresh, exciting imagery using ancestral designs as inspiration.  This piece serves as a fine example of that skill. Hardin’s clown is squatting, with knees bent and arms out, creating an appealing symmetry. It’s the clown’s stance that seems decidedly Mimbres-influenced, as many Mimbres images positioned their humans similarly.

Hardin’s clown has an intense, excited look on his face, with wide eyes staring directly towards the viewer.  The clown wears the standard clothing and jewelry one would expect to see on a Tewa clown. These details stand out in this image because of the particularly bright colors— orange, red, and turquoise; on an image that is otherwise white and gray.  The clown’s painted body and the elaborate background of geometric patterns are made entirely of white and gray. These colors are atypical, most certainly, but they work very well. Hardin must have been pleased, as the painting’s title—”Happiness in Gray Stripes”—references its color scheme along with its subject.  Hardin outlined her clown in bright orange and added light blue shades to the background, adding depth and color to the image. The background itself is amazing, with multiple layers of gray, white and blue crossing one another to form a rich tapestry out of just a few colors. Small dots in various brighter colors—most likely applied with some sort of atomizer—cover the entirety of the background as well, enhancing its impressive textural qualities.  As usual, Hardin’s work is exceptional. “Happiness in Gray Stripes” is a wonderfully unique piece from one of the most innovative pueblo painters.

The painting is signed “Tsa-Sah-Wee-Eh” and dated “‘76” in lower right.  It is framed in the original frame, with a wide fabric exterior that complements the image nicely.

Helen Hardin (1943-1984) Tsa-Sah-Wee-Eh (or “Little Standing Spruce”) was an innovative and influential painter from New Mexico’s Santa Clara Pueblo.  Hardin was born in 1943 to Santa Clara Pueblo painter Pablita Velarde and caucasian civil servant Herbert Hardin. Inspired by her mother, she began creating and selling paintings as a teenager.  She went in a different direction than her mother and her mother’s peers, creating more contemporary works that depict Native American symbology with striking geometrical patterns and abstract imagery.

Hardin's distinctive and compelling style became more fully realized in the 1970s, with a series of paintings of Katsina figures. These and her later works are immensely complex works of art that have been displayed in museums around the world.   Her personal explorations led her into the deeply affecting works of the very well-known “Woman” Series. Much of her work is concerned with the intellectual and physical struggle of her very existence—the struggle of woman versus man, patron versus artist, Indian versus Anglo, tradition versus progression.  Her art is complex and beautiful, at once forward-thinking and firmly rooted in ancient tradition. Hardin was a truly intriguing woman and one of the preeminent American Indian painters of the twentieth century. She died of cancer in 1984, leaving behind her an astounding body of work for her many admirers to enjoy.

Condition: this Painting titled "Happiness in Grey Stripes" by Helen Hardin is in excellent condition