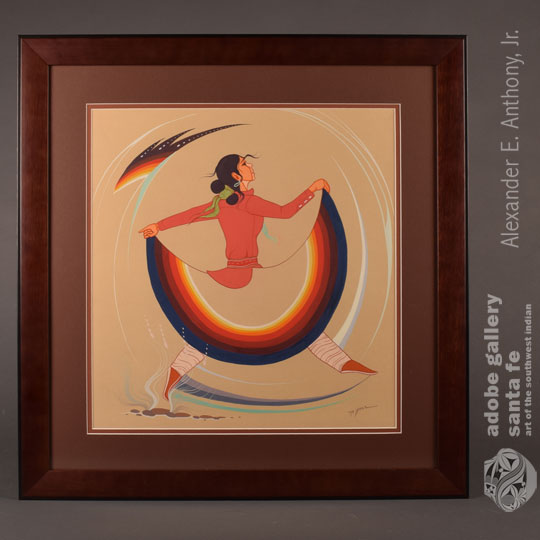 This Navajo painting by Diné artist Beatien Yazz features a beautiful young woman dancing.  The woman is depicted in profile and without detailed background imagery, as was the norm during Yazz’ day.  One leg swings out in front of the other, her arms are outstretched, and her head faces up towards the sky. She’s dancing, joyfully and expressively, across the dry expanse of the Navajo reservation.  She is wearing traditional clothing, and has wrapped her hair in a tsiiyéé—the traditional Diné bun. An informed viewer will notice the artist’s special treatment of his subject’s face. Yazz always handled his human figures with care, but this woman is portrayed in a particularly sensitive manner that deserves a close study.  Loose strands of hair flowing in the wind, dark eyes with long eyelashes, thin lines dividing the sunlit and shadowed sides of the face—these details are remarkable.

Yazz is justly and frequently commended for his remarkable use of color, and this image shines in that regard. The lower half of the woman’s skirt is a series of colored lines.  It begins with a white line and ends with a dark blue line. In between, a range of bright yellows, oranges and reds adds warmth and energy to the image. The woman holds the ends of her skirt in her outstretched hands, creating an inverted rainbow.  Swirling lines of white, violet and teal encircle the woman. A design in the upper left side contains a series of colored lines identical to that which forms the woman’s skirt. This lively, energetic and beautiful image is one of the strongest Beatien Yazz paintings we’ve had the pleasure of handling.

The painting is signed “B. Yazz” in lower right.  It is framed under glare-resistant acrylic in a simple frame, with two layers of matting in complementary purple shades.

Clara Lee Tanner’s Southwest Indian Painting: A Changing Art comments on Yazz’s gift with strong colors: “Originality characterizes much of Beatien Yazz’s painting.  Also, his colors frequently are strong and contrasting—they are seldom muted, and rich combinations of colors are typical.  With little effort he attains a feeling of action, sometimes as dramatic but not quite as brutal as that of (Quincy) Tahoma.”

Beatien Yazz (1928-2012) Little No Shirt (Jimmy Toddy) was a painter who was born in 1928 on the Navajo Reservation.  At an early age, Yazz met Bill and Sallie Lippencott, traders at the Wide Ruins Trading Post. They recognized Yazz’s talent and made available to him scraps of paper and other equipment so that he might practice his artwork.  Alberta Hannum’s book Spin a Silver Dollar tells the story of the Lippencotts and the young Navajo boy they encouraged.  The book was illustrated by the boy himself—Beatien Yazz. He served in the U.S. Marines in World War II and was a member of the famed Navajo Code Talkers. Following the war, he returned to the reservation and began to paint in earnest. He specialized in subjects familiar to him in his daily life on the reservation. He has been eminently popular with collectors since the 1950s.

Condition: this Untitled Navajo Painting of a Young Diné Woman Dancing by Beatien Yazz is in excellent condition