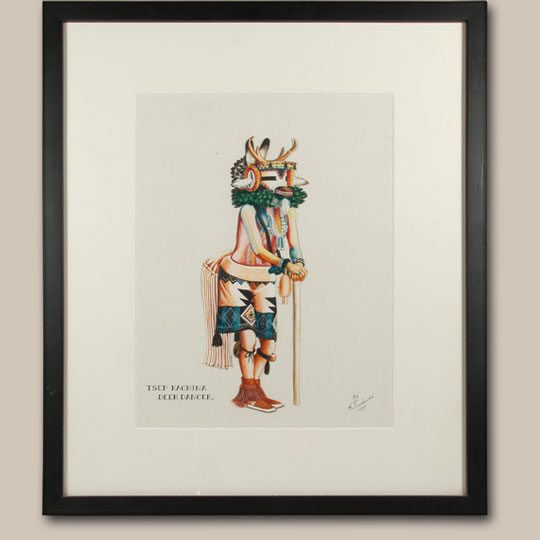 A student of Indian schools at Hopi Pueblo as well as in Santa Fe and Albuquerque, Kyrate Tuvahoema was known for his depictions of Katsinas that were “tall and lean, but with good detail and color in costume, mask, and paraphernalia.(Tanner)  Modeling, or the use of shading to give depth, was not Tuvahoema’s strong suit, but his drafting was thought to be very precise.  Tuvahoema spent much of his adult life in sanatoriums in Arizona following completion of school. He died from tuberculosis at the age of 28.  Most of his paintings were done in the late 1930s.

This painting was used by TEWA Enterprises of Santa Fe from which to make silkscreen prints.  The painting was cut out from its original paper and attached to a clean sheet.  Whether that was done as part of the printmaking process is not known.

TEWA Enterprises was an arts silkscreen printing business started in 1951 in Santa Fe by Charles Barrows, a silkscreen printer, and Harrison Begay, the well-known Navajo painter. Tewa’s mission was to hand silkscreen reproductions of Navajo and Pueblo paintings and make them available to a wide audience at low prices.  Cathie Sullivan, the current owner, purchased Tewa Enterprises and now the business has ceased work.  Many of the original paintings used by TEWA from which to make silkscreen prints have been retained in the archives of the company.

The paper has been labeled TSEP KACHINA DEER DANCER on the replaced paper.  Whether that was what was on the original paper is not known.  The Antelope Katsina is known by several names, depending on the publication consulted.  One of the older publications calls the Antelope Chof, but there is no CH in the Hopi language so that is an inappropriate name.  It is also known as Tsop, but the most accurate name is Tsuv according to a noted authority.

It is quite obvious that someone looked at the image, thought it was a Deer Katsina and so labeled it Deer Dancer.  Concurrently, that person labeled it a Tsep Kachina.  Both are inaccurate.  It would be interesting to know what Kyrate Tuvahoema (1914-1942) had labeled it on the original paper.

Condition: this Original Hopi Pueblo Painting of an Antelope Katsina by Kyrate Tuvahoema is in good condition with one bend in the paper of an antler

Provenance: from the archives of Tewa Enterprises 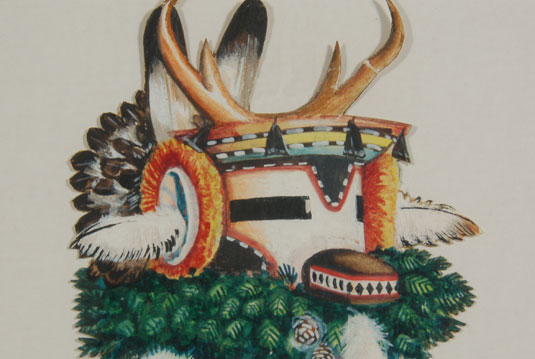