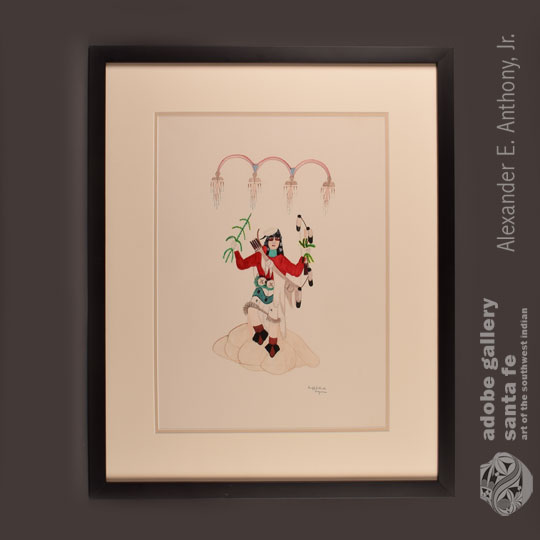 San Ildefonso Pueblo artist José Encarnacion Peña was one of Dorothy Dunn's students at The Studio of the Santa Fe Indian School in the early 1930s. He had, however, started painting earlier-as early as the 1920s. He continued painting until his death in 1979. His complete name was José Encarnacion Peña (1902-1979) and his Tewa name was spelled "Soqueen," "Soqween," or "So Kwa A Weh," which translates to "Frost on the Mountain." Those who remember him in his later years recall that he was called "Enky" (pronounced "inky").

Peña was painting at San Ildefonso Pueblo at the same time as Tonita Peña, Ricahard Martínez, Luís Gonzales, Abel Sánchez, and Romando Vigil. He was not very productive in the early years but became quite prolific in the decade prior to his passing. He is represented in the collections of the Laboratory of Anthropology, Santa Fe; Museum of New Mexico; Denver Art Museum; and many others.

In her book Southwest Indian Painting: A Changing Art, Clara Lee Tanner aptly describes Peña’s style: “A little-known San Ildefonso artist is Encarnacion Peña (Soqween). One of the early artists, he produced little through the years.  Like so many others, he was greatly influenced by the more outstanding men of his village, particularly in delicacy of style in painting dancers… Typical of so much pueblo work, the figure dominates the otherwise blank paper. Also typically puebloid is the pose of the dancer, one foot slightly raised. His abstract bird and serpent motifs have a particular vigor.”

“Buffalo Dancer” proves that Tanner’s analysis of Soqween’s “typically puebloid” style was spot-on.  The dancer dominates the paper, he’s pictured in the position described by Tanner, moving beneath a delightful set of abstract designs.  Most notably unique is that he’s pictured directly, head-on, rather than in profile. This was Soqween’s preferred perspective, and it makes his unique and attractive paintings easily recognizable.  While his peers usually depicted their dancers in great detail and in profile, which was how they were taught at the Santa Fe Indian School, Soqween’s work moved in a different direction. One could accurately describe it as primitive, and to do so would not be a slight—his are wonderfully simple compositions that possess an inexplicable charm.  “Buffalo Dancer” is classic Soqween.

Provenance: from the large collection of a New York estate Ceremonial Costumes of the Pueblo Indians: Their Evolution, Fabrication, and Significance in the Prayer Drama [Paperback Edition] [SOLD]
by Suzanne Abel-Vidor, et al