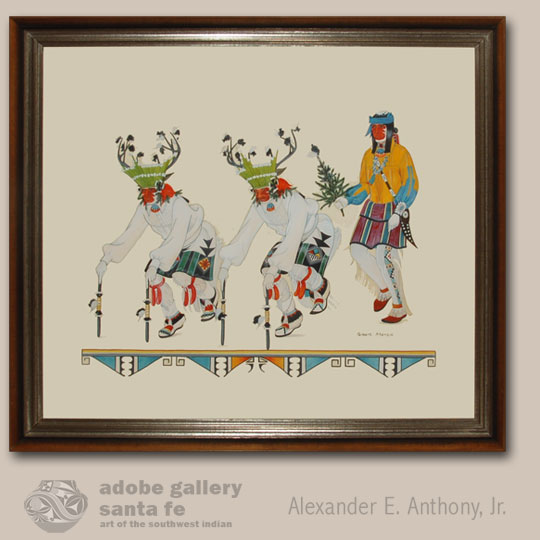 Richard M. Spivey and Gilbert Atencio became close friends during the years that Spivey was researching and writing the lives of Maria Martinez and her family.  Gilbert's family included four siblings, one of whom was well-known Santa Clara Pueblo potter Helen Gutierrez.  His parents were Isabel Montoya (1899-1996) and Benjamin Atencio (? -1963).  His grandmother and Maria Martinez's mother were sisters, making him Maria’s nephew.  His niece is Geraldine Gutierrez, who is a painter and potter living at Santa Clara Pueblo.

Gilbert Atencio painted the two Deer Dancers with raised left legs and the Deer Father with his right leg raised, in motion with an unseen drummer.  The headdresses are made using real deer antler.  The fronts of the headdresses are made from reeds and fan upward and outward in a spray.  The dancers are wearing white cotton blouses and embroidered kilts.  They wear knit leggings and traditional moccasins.  The Deer Father has a Pendleton blanket wrapped around his body and he wears beaded leggings.

Gilbert Atencio is recognized as one of the finest pueblo painters of the second half of the 20th century—not only from San Ildefonso Pueblo, but among all pueblo painters.  His attention to detail was unequalled.  As a professional medical illustrator at Los Alamos National Labs (New Mexico), Atencio carried his precise drawing and painting skills over to his fine art paintings.  His crisply drawn and clearly colored renderings of ceremonial and home life have, since around 1947, been favorites in many shows.

Provenance: from the collection of Richard and Lynne Spivey who received it as a Christmas gift in 1973 from the artist.

Recommended Reading:  Through Their Eyes—Indian Painting in Santa Fe, 1918-1945 by Michelle McGeough, Wheelwright Museum of the American Indian, 2009 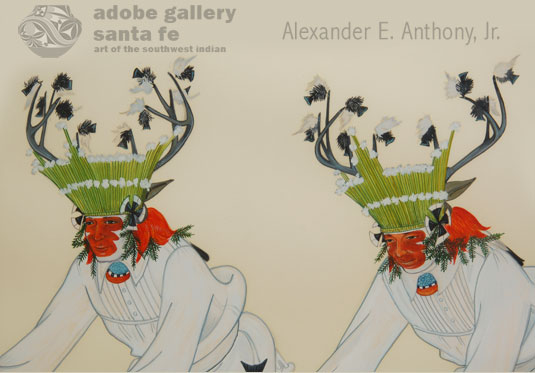