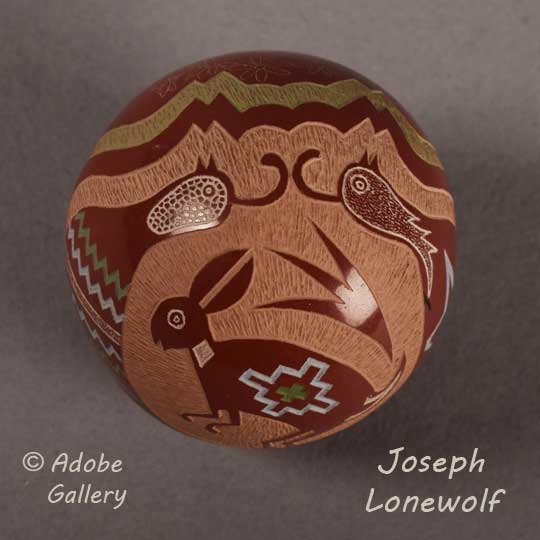 This miniature seed pot was created by Santa Clara Pueblo potter Joseph Lonewolf. It was made in 1985, long after Lonewolf popularized and mastered the sgraffito style seen here. Lonewolf had worked in this style for many years when he created this piece. It is obvious that, at this point in his career, he was working at a high level creatively and technically.

Rather than center his designs around the top of the pot, Lonewolf formed a scene that faces to one side. In its center, a Mimbres rabbit appears. A pair of quail appear, with one on each side of the rabbit, reaching up and arching over the rabbit. On the back half of the pot, the beautifully polished red slip rises almost to the top, with butterflies, flowers and a star design carved gently and precisely into the surface. Lonewolf enhanced the remarkable composition with white, green, and light blue pigments, adding depth and energy. This piece is modest in size but ambitious in execution. The bottom of the pot is signed Joseph Lonewolf, marked with the artist's hallmark wolf face, numbered N1QRCM, and dated 85.

Provenance: this Polychrome Seed Pot with Rabbit and Quail Designs is from a private collection